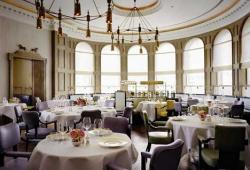 Lunch in London is how knowledgeable foodies get their fix of the best around. A meal that might cost upwards of £70 a head in the evening can be less than even half that if you cannily go for the set lunch option.

And it’s not a question of having to compromise either. The good chefs put a lot of thought into lunch ‘prix fixe because it’s seen as a chance to break away and to make best use of what’s available in the markets on the day.

Head chef at Roux at the Landau at the Langham Hotel is Chris King, an impossibly boyish looking chap whose appearance belies his experience. He worked at Le Gavroche over the past five years, has cooked at Per Se in New York, and was Sous Chef at Roux Parliament Square. Clearly the Roux Bros think highly of him and he joined me for a chat after a Landau lunch that was a perfect mix of French style, mixed with a touch of the exotic and a seasonal selection of market must-haves.

The Landau set lunch is three courses for £37.50, or £47.50 with a half bottle of wine from a short but punchy list. To eat at this level, in that room and for those prices is good value, and the number of people I could see in the room taking advantage rather proved it.

I rather fancied the crisp pig’s head and trotters with brandy soaked Agen prunes to kick off, but much as I Iike Pinky’s head, Perky’s trotters have always put me off. So I went all Autumnal with a butternut squash veloute with miso, marinated shimeji and black sesame. The colour was gorgeous, like liquefied Halloween, and the sweet notes of the miso worked perfectly with the earthy butternut. Each little mushroom was pliant and juicy and gave a bosky tang with a Japanese accent

I love a good duck and the seared duck supreme on a liver, radiccihio and red risotto was irresistible. I was surprised at how soft and soupy the rice grains were though. ‘I think it’s just right,’ asserted Chris sternly ‘You have to be careful how you serve risotto in London, if it’s too al dente it will nearly always come flying straight back to the kitchen.’And cooked like this it has really absorbed all the flavours.’

I wasn’t surprised at his defence. One thing I’ve personally learnt about risotto, from talking to lots of chefs, is that there is no ‘right’ way of cooking it. Italian chefs will argue vehemently about texture and you just can’t get a consensus. Daniel points out that ‘Italian chefs judge readiness by shaking the pan and watching the wave the risotto makes.’ Which sounds so Italian and relaxed, I bet Heston on the other hand uses some kind of mechanical testing device designed by NASA.

Most chefs do agree though that Acquerello rice is the one to add and Daniel does too. ‘It’s aged and it’s the best for flavour, it’s not cheap, but it’s worth it. It’s what we always use here.’ My risotto is wonderfully rich with wine and duck livers and the sliced breast on top is perfect – it has pink and it has sear and so it has it all. It’s good to eat fine food in a proper room too. 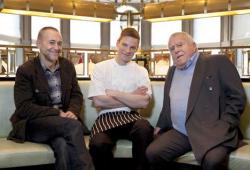 ‘It was purpose built to be a restaurant,’ says Chris looking around his space happily, ‘it’s not been made out of something else, like a library or a basement. It suits my cooking which is influenced by French classical, which is a bit downtrodden now fashionably, but I like the structure, it’s not ‘small plates’.

It’s a room with history as well as style, heads of state have always eaten here since 1865, as well as such Great Britons as Conan Doyle, in fact it was over lunch here that Doyle was commissioned to write the Sherlock Holmes novels. No doubt the food he ate back then was not the same as now, but he would have approved of the carving trolley of daily roast birds and joints – an option that Daniel is happy to provide to old-skool lunchers for a £5 supplement.

With a selection of fine cheeses, or if you prefer a wonderfully wobbly Amaretto Panacotta with pear ice cream and salted almonds, the Landau rounds off lunch with light love. It’s a pleasure to eat such unshowy, unpretentious but finely judged cooking by a chef who hasn’t bought a sous vide and thinks himself a star, but who has risen the hard way through skill and hard work.

And of course, once you’ve eaten the prix fixe, you’ll be back to try the impossibly good looking a la carte in the evening. Lunch is just for starters, after all