A rite of passage (for me at least) was discovering mother didn’t know best when it came to the dinner table. I now opt for a steak as pink as a restaurant is legally allowed to serve instead of waiting for the meat to’brown’. Stuffing no longer comes out of a packet and brown rice isn’t a conspirator in the kitchen: something to be viewed with abject suspicion and distrust.

Another instance is the first time I had what I assumed was undercooked pasta. And it was thoroughly more enjoyable than the disintegrating sludge served in a stock-cube broth I was hitherto familiar with. Al dente! My eyes were opened. A life-long union with pasta began as my go-to comfort food, default meal and primary ingredient for culinary experimentation.

My carb-mania is enabled daily of the high profile presence of fresh pastas in supermarket fridges. Always looking to expand my horizons in the pasta field I was especially excited to learn of a new Giovanni Rana fresh filled pasta. Giovanni Rana began in the 1960s in Verona, Italy. A family of bakers, they have been experts in making fresh pasta for over 50 years. The fresh filled pasta is made in Verona using locally sourced products. Scoring points for authenticity and artisan production the pasta ranges promised to be unique in flavour and texture. 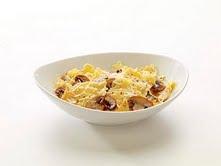 This is certainly true of the first batch I was delighted to taste. Gorgonzola & Crunchy Mellow Walnut Ravioli, contains a sharp and rich Gorgonzola cheese blended with crunchy walnuts, wrapped in large pasta ravioli. It was a delightful dish that internalised the nutty kick of pesto and provided the cheese-fix that pasta sometimes sorely needs.

Next up was the Rich Bolognese Tortelloni. Using an’old family recipe’ the Bolognese was certainly rich with gently acidic tomato and creamy filling. Giovanni Rana is urging all consumers to cook the pasta’the Italian way’. In other words, cooked during a quick two-minute boil and served without lashings of rich sauce.

The fillings are to be savoured instead of cancelled out with additional sauces. Giovanni Rana suggested a drizzle of olive oil or butter and a few shavings of hard Italian cheese. I disobeyed him slightly by adding some feta, chilli oil and sun-dried tomatoes Ã¢â‚¬â€œ with excellent results.

The strengths of these dishes and the other tempting combinations in the’Simply Italian’ range is the deviation from the usual dry paste found in similar fresh pastas. Ingredients such as the cheese found in the Selected Italian Cheeses Ravioli are predominately products of designated origin.

There’s also the enticing combination of the Chicken & Mozzarella with Smoked Pancetta Ravioli, and immobilising Mushroom with Creamy Ricotta Ravioli containing Porcini and champignon mushrooms. The new ranges of filled pastas have turned an instant meal into a bit of luxury, with fillings that are certainly no’filler’.

Giovanni Rana is available from ASDA, Sainsbury’s, Morrisons, Booths, Ocado, Whole Foods,and convenience retailers with an MRRSP of £1.99 for Simply and £2.49 for Indulgence.