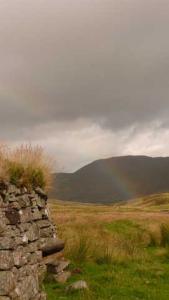 The taunting grouse cries of ‘goback, goback, goback ‘ preceded a whirring of wings. Clad in smart tweed camouflage, our tightly structured line halted, raised shotguns to our shoulders, took aim and fired. With a whiff of sulphur, the detonations briefly shattered the peace of the valley. As a beaten pillow, clouds of feathers fluttered to the heather floor, scorched for cover and looking like petrified seaweed. Exchanging 18 hours on his feet in the kitchens for a day on the moors, South African Chef, Pete Gottgens almost casually scored three grouse with two shots. Adrenaline pumping, I got one – not bad for a first timer. With his 83 year-old father looking on, third generation gamekeeper, Ally sent in his black retriever, approved the birds, then anointed our foreheads with their still warm blood.

With the aim of shooting, plucking and of course eating red grouse in time for lunch on the first day of the four month season – the ‘Glorious Twelfth’ of August – I had come in a prowling Land Rover to the magnificent Ardtalnaig Estate. Located off the shores of Loch Tay in Perth and Kinross, these beautifully humbling 8,500 acres were transferred into Gottgens’ tenure just one month before. In addition to a network of tenant farmers and a full time ‘forager’, the acquisition not only secures Ally’s future, but also provides a supply of lamb, game, beef and berries to Gottgens’ Eden, the Ardeonaig Hotel.

Along with his English wife, Sara, Pete rejuvenated this once lowly inn into a television-free retreat, bringing a South African influence to Scotland’s natural charms. Springbok hides, inner cow tusks, a personal library and family photos warm a buttermilk décor. Luxurious colonial style thatched cottages (or ‘rondawels’) dot the grounds besides a burn. Pete’s cooking is gutsy but precise, showing off his beloved Plancha grill’s versatility. 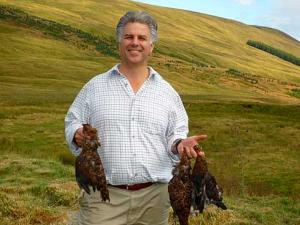 Before being lured to the highlands by scenery reminiscent of South Africa, the enviable proximity to tantalising ingredients and a bloodline to his Scottish great grandmother, Gottgens opened four restaurants in London. These included the ‘Springbok Café’, where a fortuitous meeting with Nelson Mandela ensured he went on to cater the President’s state dinners. The evergreen favourite, a molten chocolate miele pudding, bears testament. Another restaurant was the much-admired ‘Fish Hoek’. To raise its deposit, with only ten days notice, he accepted the challenge from which other caterers had fled: to mastermind a South African barbecue (or ‘Braai’) for 35,000 on London’s south bank. Despite not sleeping for 100 hours, the ardent supporter of military service and son of South Africa’s first five star hotelier pulled it off, directing a brigade of 120. Amongst the migraine inducing logistics, 30 machines ran flat out to press ten tonnes of ripe South African oranges.

These days ‘nothing’ would tempt Gottgens back to the big smoke. At the estate’s cosy bothy, so remote and free from distractions including electricity that an author has already bagged it for winter writing, the cream of Pete’s kitchen and front of house laid out a decadently un-bothy like feast on linen. Even modest lettuce became compelling in this setting, flawlessly grown from the hotel’s edible gardens by an extremely sited vineyard of hardy American vines. Young Maris Peer potatoes the size of thumbs had ivory centres. Game pie was moist with brittle pastry and game terrine expertly layered and almost ravishingly succulent. Trout fished from the rippling silver loch beside the hotel was subtly but profoundly smoked. Drizzled with Saxenberg olive oil, a salad of tomato and fennel was uplifting. But our grouses provided the main act. 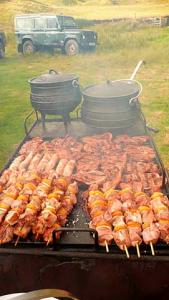 Bypassing the need to pluck them, Pete removed their breasts, frying them in a pan of pomace oil (hot pressed olive oil) just long enough to seal them before allowing them to rest for 8-10 minutes. The livers were fried with shallots, brandy and fresh thyme until soft. The mixture was then ground by pestle and mortar (there being no electricity for a blender) and painted onto slices of toast. With the meat placed on top, these absorbed the succulent juices. Served with estate vegetables, it proved supremely tender, tasting of light, sweetened liver. Deeply musky Scottish Chanterelles the colour of wood shavings drew out brisk, moorland flavours.

As my teeth easily sunk through such extraordinarily fresh morsels, a fellow journalist from ‘The Scottish Field’ asked me if I had experienced guilt when I shot ‘my’ bird. I hadn’t. Aside from bringing economic benefits to a remote region, I saw the shoot as death in the name of dinner rather than dalliance, whilst respecting the rules laid down by the historic Game Act of 1831. And rather than having it easy, instead of seeing tame specimens beaten to the air, we had actively stalked our prey with no guarantee of ever encountering a bird.

Until his Scottish vineyard matures, Pete only serves bottles from home. From his cellar, which I am told is the largest South African stash in the U.K., a rested, but still tangibly fruit driven eight year-old Shiraz, Pinotage and Merlot in equal proportions (Quoin Rock) bevelled the meat with fine, crisp tannins. 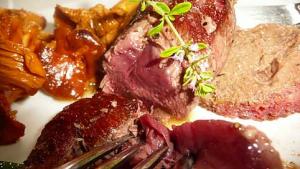 Through words on a page, it is hard to convey what a wonderful lunch it was, especially considering that only a few days before, the bothy had been almost uninhabitable, its floorboards torn up and burnt by careless walkers. Having stalked (and occasionally sunk into) the carefully managed larder where the revered red grouse was reared, protected from ticks, worms and, most devastatingly, golden eagle predators with six-foot wingspans – they must be distracted with pigeon decoys – a gratifying thought entered my mind. In convivial surroundings, we may have tasted the first grouse of the year. I bet its flesh tasted sweeter here than in a dark Mayfair dining room where restaurateurs could charge over a £1000 a bird at dinner that night.

After jubilee strawberries and a wee Scotch snifter, we blasted clays (my aim seemed improved), took tea with blonde scones plastered with intense homemade jams, rescued a sheep struggling to cross a burn, and went on to enjoy a tin drum barbecue.

Douglas Blyde stayed at the Ardeonaig Hotel, shooting at the Ardtalnaig Estate, where guests can arrange to walk, stalk and also ‘photo stalk’ red stags, red hinds, ducks and grouse.

In addition, the inaugural Ardeonaig Festival of Food and Wine takes place 15-18 October.

To glimpse the very best of Scotland in autumn, visit: www.visitscotland.com/autumn