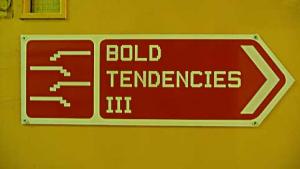 Bypassing a stalled lift, the mirror of which was scrawled with ‘Heaven’, I took a deep breath of ammonia infused air and crept up a ramp through dark, hellish gates.

On one of the wettest evenings outside a rainforest, I had come to ‘Bold Tendencies’, the third summer showcase from the local but far-reaching, ‘Hannah Barry’ gallery. Through sculptures, lighting and curious sounds, the otherwise derelict top tiers of a Peckham car park have been transformed into polished decay and dreamy decadence.

Architecture graduates, Lettice Drake and Paloma Gormley (daughter of Anthony Gormley OBE) took two months to build the star of the show. For the first time in the short history of this annual exhibition, the result is an amusingly titled pop-up restaurant, ‘Frank’s Café and Campari Bar’. Sturdy but tactile, its timber counter and communal tables are tinted in the cochineal tones of the famous bitters by a tarpaulin awning. Stretching over and under the tenth floor deck, securing straps were put to the test by a downpour so torrential that London’s landmarks melted into the mist. Armed with hope and broom-handles, dedicated staff prodded away the most threatening bulges pooling above us.

Orchestrating the show are two south Londoners in their early twenties. Lending it his name, Frank Boxer (who is actually lanky) trained as bar manager at arguably the city’s most famous gastropub, the ‘Anchor & Hope’. He is joined by Mike Davies, a former grapefruit cell plucker at the ‘Fat Duck’ restaurant, although from what I sampled at these dizzy heights, he appeared more inspired by his time spent working under architect turned chef, Fergus Henderson at ‘St. JOHN Bread & Wine’.

I like the idea that Boxer and Davies are reaping rewards from a drink devised by another precocious entrepreneur. Born in Lombardy in 1828, Gaspare Campari was already lauded as a master mixologist by age 14. In a sense, owing to the rapid popularity of his bitter aperitif – a blend of 60 herbs, spices, fruit peel and bark – Campari unified Italy before Giuseppe Garibaldi. 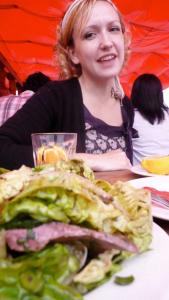 Describing our mission as ‘figuring out how much Campari is too much Campari’, my architect friend, who is placing the loos at the Olympic village, washed away the memory of her working day with Campari, Prosecco and a slice of orange. Adding more sweetness than the traditional soda splash, the wine’s delicate bubbles amplified the liqueur’s near medicinal aromas.

From a menu printed as a receipt then pinned to a board, luscious crabmeat overspilled lightly charred toast. Because of a ban on gas, from a more exciting breezeblock and steel drum trough belting heat from the coals, diced ox heart was surprisingly tender and crisply spun into a well-textured salad. Simply served, sardines which might have cut down food miles by swimming here in this weather, had char-brittle skin and plump, moist flesh. With homemade crumbly date and pecan cake and roughly churned but spectacular strawberry ice cream, Frank prescribed the classic Negroni. Alas, this sticky concoction of gin, sweet vermouth and bitters proved that cake and Campari are not the best bedfellows.

After a visit to a potentially embarrassing open plan loo with a view, it was time to give up our space for a burgeoning party of Frenchmen. Beginning a waterlogged decent, with ample bitters surging my bloodstream, I nearly tripped over the wires supporting a piece entitled the ‘State of Restoration’. A sign, I suppose that I had found out how much Campari was too much Campari.

Despite, or perhaps because of, the melodramatic weather, taking refuge under the bright red canopy amidst cosy smoke, it had been an enchanting evening. If you find the surreal fantastic and the bitter beautiful, be sure to pop up to this pop up before it resorts to a tramps’ hotel, end of September.