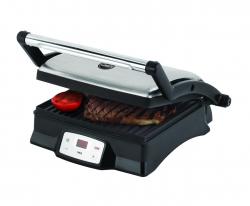 Everyone knows that many kitchen gadgets land up stored somewhere after their initial use never to be used again. There’s no chance of that happening with the ‘Cooks by Gordon Ramsay’ Searing Grill, which is part of a new range in collaboration with Sensio Home, though it’s just too useful. I’ve had one for about a week and I’m now cooking around 50% of all my meals in it.

Before I go into more detail about what you can cook in it and why I’m so attached to it that I now refer to it as ‘Gordo’, it’s worth explaining what makes the searing grill different. The clue’s in the name really because it has a “unique ‘burst’ temperature feature that reaches 260° for 90 seconds, sealing in juices, and caramelising food on the outside for added flavour”. This isn’t just a marketing ploy it actually works.

The first meal I attempted in the searing grill was steak which I cooked according to the instruction manual’s guidelines for medium rare. The 90 second sear forced out a loud sizzling noise from inside the grill and the remaining few minutes of cooking time sent a mouthwatering smell of barbecued meat around the kitchen. When I opened up the grill I found my fillet had been branded with stripy grill marks and looked juicily ready to eat.

Besides the steak I’ve cooked a lot of other stuff in it too like mushrooms, peppers and courgettes. In fact I’ve been grilling the peppers in bulk so I’ve got delicious grilled peppers available to add to pasta sauces, home made pizzas and even the occasional healthy salad.

For dessert last night I used Gordo to cook up some peaches which I’d cut in half and poured honey over. The combination of the honey and the high temperature of the grill meant that the surface of the peaches caramalised beautifully.

The most adventurous dish I’ve knocked up, which also featured honey, was a goats cheese, chocolate and honey sandwich made to a recipe I’d nicked off one of the guys working at the Rabot Estate in Borough market. If I hadn’t had the grill I probably would have tried to do it in the toaster and subsequently landed up spending the rest of my evening trying to scrape out the remnants of the filling from the inside of the toaster.

The matter of messiness leads me on to my next point. This searing grill not only cooks food well bit saves on loads of washing up. Obviously you have to wipe clean the grill surface after you use it, but there isn’t a pile of pans, spatulas and baking trays to clean like when you use the oven or hob.

The ‘Cooks by Gordon Ramsay’ searing grill is a great addition to a kitchen sure, but if you were a student with limited funds for gas and limited space to cook in, this grill could be the only thing you needed.

The searing grill costs £49.99 and is available from Argos, with other highstreet retailers following suit soon.