Simnel Cake is an Easter time fruit cake, made with lemon, dried fruits and peel, treacle and marzipan. It turns out that an interesting mythology has formed around this ancient fruity fare. The Simnel Cake according to many, is an Easter Cake, baked during the Easter period. You see it has eleven little balls of toasted marzipan on the top that Christians believe alludes to the true deciples of Jesus (Judas doesn’t figure in this equation). You can even put a ball in the centre, just for Jesus, if it pleases you. Others say the Simnel Cake is a post-Lent delicacy, containing all the goodies that you are not allowed to enjoy during the fasting period. 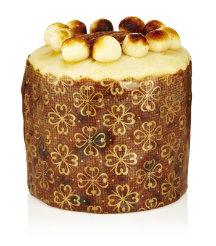 Another popular legend attributes the invention of the Simnel cake to Lambert Simnel, but this has been debunked since the Simnel cake appears in English literature prior to Lambert’s bid for the throne. I’ve also read that it is traditionally baked on Mothering Sunday, made by many a young girl to bring home to their long-suffering mother. Wikipedia would have us think that the name most likely derives from the Latin word ‘simila’ meaning fine, of course refering to the white flour used in the mix and possibly to the rich ingredients found in the recipe. About.com suggests that the name came from a sister (Nell) and brother (Simon) who wanted to make a cake for their mother. One wanted to bake the cake, the other to boil it. They decided to do both and bring them together in one which became The Simnel Cake.

So many stories and so little time to ponder on which could be the true meaning behind the unusually named Simnel Cake. I don’t particularly care where it comes from or what it means, but I do care deeply what it tastes like. I had my first slice of Simnel Cake when sampling the Harrod’s Easter goodies recently. I’m not usually big on fruit cakes; I can think of so many more tantalising ingredients outside of the dried fruit ouvre. But I have seen the error of my ways people. I have repented.

The Country Fare Chunky Simnel Cake from Harrod’s comes in a tin, with a photo of baker, Margaret on the front. She looks pleased with herself and it’s no wonder, the cake was bloody beautiful! The smell hit me first, a heady mixture of butter, sugar, syrup, dried fruits and marzipan and it tasted even better. The cake was moist and did not have the slightest bitterness of over cooked dried fruit. I enjoyed only half of the baby Simnel Cake that afternoon and I believe I suffered from an acute sugar rush minutes later. So take care with this sweet treat, it packes a sugary punch that could render you entirely useless for hours.

You can buy the Country Fare Chunky and Baby Simnel Cakes at Harrod’s in store and online. www.harrods.com