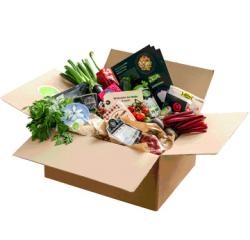 The wife’s backing through the door with a large cardboard box clamped to her in a bear hug.’I found this sitting in the front garden,’ she puffs lowering it to the floor and almost crushing the cat,’I assume this is something to do with you?’ It is indeed, it’s my delivery from Hello Fresh in fact. The email the previous night had said to expect delivery mid-afternoon but it’s only 11 am, so the delivery man must have knocked pretty lightly, not a good idea when the box contains fresh fish and meat. Lucky it’s only 1 degree outside, it being April in England.

We tear into the recyclable box, naturally failing to spot the easy open rip tab, and under layers of insulation and freezer blocks, food starts to appear – a pack of fresh king prawns, a pork loin and a pack of chicken breasts. Around and about are small packs of spices, soy sauce, some ginger, tamarind paste, garlic and a bright red chilli. There are courgettes, leeks, noodles and rice. It’s all rather like Xmas as we start to clear the fridge of unnecessaries to make room for the booty.

Hello Fresh is an idea for budding cooks with little time. Every week the chefs create recipes that are claimed to be easy to prepare. They then source the required ingredients from independent British suppliers and crucially, only pack into the box exactly what you need. This means the cost for the end user is more precise, nothing in excess and nothing to throw away, the spices are fresh and in the right quantity so you don’t end up paying for a large pack of a spice that you will use only use a small fraction of, leaving the rest to go stale.

The recipes are on high quality laminated card and so reusable, and boxes come in two types – Classic and Vegetarian – with the option of two, four or six person quantities and three or five days’ supply. A Classic two person, three meals is around £39 so about £6 per person, per meal by my maths.

Not a bad price, when you consider the free postage, the saving on time and petrol spent going shopping and what a does a pint of beer cost nowadays? No I’m not entirely sure either, but it must be at least £3 and beer has little nutritional value despite what some people might say

Our selection was Pad’s Tiger Prawn Pad Thai with Tamarind, Persian Chicken with Ginger Rice and Courgettes and Pork Fillet with Creamy Tarragon Sauce, a choice that was fairly cross-cultural and interesting

Looking at the recipe cards it’s clear that they set the instruction bar pretty low at Hello Fresh; they assume you actually know how to boil a kettle, but otherwise it’s Janet and John stuff, which is fair enough as over estimating the cook’s skill would be a far bigger mistake.

We found the instructions thorough and with no surprises or omissions, which is more than you can say for far too many cookbooks these days, the ones that leave you holding a kumquat in the air with a WTF expression on your face. The precise portions were neat; Japanese soy sauce came in one of those sachets which normally deliver mayonnaise, while a mix of spices was in a small container.

The red chilli for the Pad Thai was too feeble heat wise, but that’s always the lottery of chillis and hardly Hello Fresh’s fault, but the coriander was excellently fresh and aromatic and the ginger moister than usually comes from my corner store. The tamarind sauce in a small packet was perfect, as tamarind is not something you use every day and it doesn’t store well, just takes up valuable fridge space.

Over three successive evenings we cooked all three dishes and they turned out really rather well. It was certainly good to not have to think about each night’s meal after a hard day’s work, and good too to not to have to rummage around cupboards to seek out long-lost ingredients now boasting the texture, aroma and appeal of bags of sand.

Of course this is dining for the comfortably off, twin income family, but if it stops them buying takeaways for twice the price and half the quality it has to be a good thing. And the family that cooks together stays together.