Sick of being sneered at by’baristas’ for not knowing what you want fast enough in the trendy coffee shop? Want to enjoy a decent no-hassle caffeine hit at home? Then you may fall in love with Lavazza. 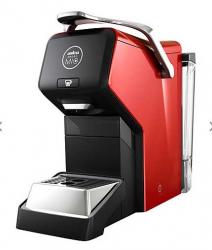 I’ve always had a bit of a love hate relationship with coffee – I love the way the beans smell when ground, hate the way  that the finished drink rarely, if ever, tastes as good at that aroma promises. Cappuccinos, lattes, flat whites? I’ve tried them all and gone back to tea, especially at home where a succession of cafetieres and percolators has ended up banished to the back of the cupboard.

In fact the only coffee I ever really enjoyed until recently was the’mud’ coffee of the Middle East and endless espressos when in Italy. I love the idea of coffee being treated as a drug, to be mainlined by way of mouth and if possible’corrected’ by a shot of spirit.

But making espressos at home was a dream; not so very long ago you needed a machine that looked like it belonged in the engine room of the Ark Royal.

Now capsule coffee makers are all the rage and Lavazza are quite a player in this lucrative market. Lucrative because rather like console games or inkjet printers, the money is in the consumables; once you’ve made your choice you’re tied to that manufacturer forever.

Lavazza have been in the bean business for over 110 years and began their own capsule system in 2007 and we were sent a loaner of one of their new A Modo Mio machines for test.

The one we received was the Ãƒâ€°spria model, a compact grey little number that slid easily between the other gadgets on the worktop. This however soon proved to harbour what I felt to be a design fault. With no instruction book, this loaner had been through a few hands before it got to ours, I couldn’t find the on/off button and when I finally did  it was on the side low down and unpressable without first pulling the machine clear of its neighbour.

Once pressed it made the two buttons on the front begin flashing to show, I had to presume, that the machine was warming up. Within about thirty seconds these lights lock on so it was time to brew.

The big chromed arm that you pull back, insert cartridge, then pull down to’lock and load’ is gloriously over-engineered and I loved that. The action pierces the coffee pod in numerous places and creates an airtight seal. The machine pushes water through very tightly packed ground coffee using 15 bar pressure so that seal really needs to be strong

Then you choose from two buttons for either a mini espresso or a double. Simple stuff, as it needs to be when you are bleary-eyed in the morning and attempting to feed the baby some Whiskas and burp the cat.

In operation the machine is quieter than Nespresso machines I’ve tried in hotels; it’thrums’ rather than revs and the coffee flow starts within seconds. The cup holder is reversible so that you can place small espresso cups nearer to the spout or lower it to use larger cups if you intend to add milk later. This machine doesn’t have a milk frother, although others in the range do.

There are a range of ten coffee types available from Lavazza, the demo machine came with samples of Intensamente, Appassionatamente and Deliziosamente and each time the machine produced a velvety crema with an attractive hazelnut colour. The crema is key; no decent espresso can be without a good crema, a product of the natural oils and dependent on many factors. Capsule machines all but guarantee the coffee has the correct grind, density and vacuum packed freshness required for a good one. 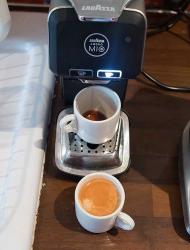 All the blends tried had great flavour and it was fun to explore the differences in such an easy way. All could be diluted with hot milk to make longer drinks and for that it would be good to spend the extra bit of cash to get a machine with a milk steamer.

I was certainly convinced by the Lavazza machine’s worth and preferred the coffee to my Nespresso and Dolce Gusto experience,  a box of capsules is around £4.20 and you get sixteen so that’s 26p a shot which is well worth it  and makes them one of the cheapest coffee capsules around. Oh and if you’re really bleary in the mornings, it has a safety automatic shut-off function after 10 minutes of inactivity.

The Lavazza A Modo Mia Ãƒâ€°spria is one of three Modo Mio models and is available for around £68 in grey or red from Amazon, John Lewis, Tesco complete with sample packs of coffee