‘You have to wear gloves for this part, Health and Safety you know?’ says Chef Noel Gutrin pulling on a pair of enormous gauntlets. ‘You also have to wear goggles, he adds. ‘Not me though as I already wear glasses.’ His team standing around looking like arc-welders in their own goggles, all laugh politely. Whatever kind of kitchen you’re in, and this a very weird one indeed, it’s always a good idea to laugh at the head chef’s jokes. 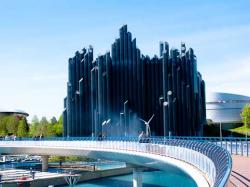 This is in fact the kitchen at Le Cristal Restaurant at Futuroscope in France, the theme park you’ve probably never heard of. A short ride from Paris, and with it’s own dedicated TGV (Train Grande Vitesse – High Speed Train) stop, it’s a French theme park based upon multimedia and audio-visual. It has custom-built 3D cinemas, and even 4D cinemas, that deliver surround vision like almost nothing else in the world and all in one place. All films come with headsets delivering the soundtrack in excellent, properly acted and dubbed English.

Plus there are other fun attractions and shows too, such as water cannon to drench people on the boat rides, a robot that kids can climb into and go dancing in and a space age revolving view tower that takes you high up into the sky. It’s also, thanks to Le Cristal, one of the few places in the world where you can sample full on Molecular Gastronomy dishes without going a six-month waiting list and spending your life-savings. 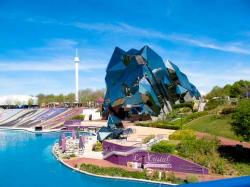 The walk to Futuroscope over a bridge from the station is stunning – dramatically set against an azure sky are buildings straight out of Sci Fi central. A beautiful blue lake beckons you in, ‘don’t go in,’ advises a guide, ‘ the blue is actually a special dye’. Oh, ok then, so the lakes a fake, but when it looks this good who cares?

Futuroscope opened in 1987 and is now the second most visited theme park in France (guess which is first?) and is quite unique. Educational in a fun way, it attracts a more middle-class kind of family who don’t want to be besieged by consumerism and who are looking for better weather than found in the grey north. The Vienne Departement is one that, like its neighbour the Charente, enjoys above average sunshine, despite being only halfway to the Mediterranean. And for us Brits the best bit is that it’s a simple short train ride from St Pancras while Ryanair goes to nearby Poitier in an hour. 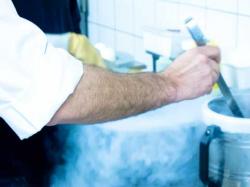 Served by plenty of mainstream quality restaurants, Futuroscope’s special gourmet stop is Le Cristal. Built uniquely for the park it is indeed shaped like a crystal, with a roof line which surges upward in enormous multifaceted shapes and which boasts a fine terrace onto that blue lake. 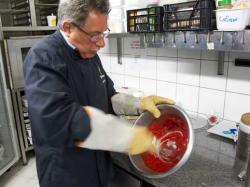 Chef Noel, he of the gauntlets and jokes, has made Le Cristal a place where you can sample the cuisine ‘of the future’ and have a laugh while doing it. He hands me a meringue that I pop into my mouth and suddenly I’m belching smoke as the sweet treat dissolves. ‘Children love it,’ Noel, says shoving one into his own mouth and blowing smoke out of his nose, ‘they are made using liquid nitrogen. A simple thing but such fun.’

And fun is the watchword here. Molecular gastronomy is about mouthfeel, colours and temperatures using chemistry, natural produce and state-of-the-art technological tools. It’s taken to its height at The Fat Duck by Heston Blumenthal of course, but it’s also expensive and sometimes rather too hard to digest. 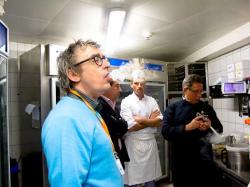 There is a Fat Duck connection here as Hervé This, the father of MG and a gourmet chemist at the INRA, a researcher at the Chemistry Laboratory College de France, and who has worked alongside Blumenthal and Pierre Gagnaire, is also an advisor at Le Cristal. His knowledge, combined with the traditional cooking path that Chef Gutrin followed until Le Cristal was born, results in food that amazes but which doesn’t demand worship and tastes great.

Chef Noel demonstrates spherification for me, the technique whereby drops of liquid receive a calcium skin so that they become spheres, or virtual caviar, on the plate until ‘popped’ by your fork. It is pretty much the most basic form of MG.

He makes some raspberry spheres and puts them into a tall glass. When champagne is added the spheres dance around in the liquid playfully and when drunk the effect is of ‘double bubble’, the bubbles of the champagne mixing on the palette with the raspberry ones. It’s a neat way to start a dinner party at home, he says, and there is a Molecular Gastronomy kit you can buy at the gift shop to do just that. 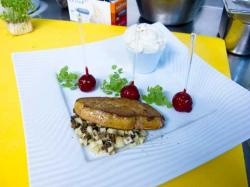 More grown up is a dish of foie gras. Sourced from a small supplier a few kilometres away the foie is pan seared traditionally then served with lollipops of ‘toffee apple’ enveloped in a clever MG fruit gel. With it comes a frothy cup of mousse made from morel mushrooms and stock that’s been blended and fired through the kitchen version of a soda stream to make it ethereally light so that it bathes the palate in flavour. 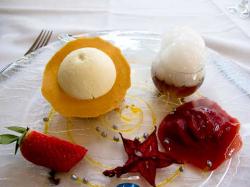 Finally he shows me the ‘star’ dish, in that it features cosmic ideas. Like all the dishes, on Le Cristal Menu it is themed around the attractions.

This is a dessert which features a ‘black hole’ which bubbles and gushes with a dark alcohol, a sorbet of basil, stars made from the Oriental star fruit and Saturn made from spherified white chocolate around a centre of pineapple, a liquorice nebula is in the centre dotted with constellations.

It’s all great fun and most importantly it tastes good. The menu may have jokey names, but Chef Gutrin is no comedian. The menus represent cutting edge molecular gastronomy with good old-fashioned flavour packed French cooking as in The Dynamic Vienne Meadow – Fillet of lamb pan juices with savoury aubergine compression and gelatinised peppers and vegetable salpicon. Or The Louisiana Bayous – Marinated organic salmon cylinder, tangerine-scented zephyr mousse, soy bean and lemon grass salad with a ginger boost, par-cooked haze with coriander. 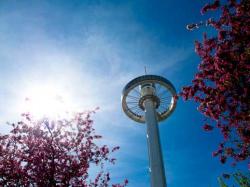 Even the under -8’s are catered for with Nipper’s Itinerary – The delectable ladybird (tuna and mayonnaise, bed of blossoming mizuna) Minced steak, farmhouse potatoes and Toddlers’ favourite, with a surprise serving at the end of the meal (marshmallow-based combo treat).

For foodie mums and dads despairing of ever eating a decent meal with the kids, Le Cristal is a real solution. But then Futuroscope itself is a great day out for families. In fact make that two days, we were so taken with the amazing 3D films and the affordable fine food we wished we had had another day to take it all in. Plus in the evening the park comes alive with water displays and laser shows and with cheap accommodation all around the area, staying over is easy.

We have seen the future and it tastes great.

Return fares from London to Poitiers start at £112 in standard class. All prices are per person and subject to availability. For bookings visit www.raileurope.co.uk or call 0844 848 4070. Personal callers are welcome at the Rail Europe Travel Centre, 1 Regent Street, London SW1.