The Mall Tavern in Notting Hill is different, but then so is its chef.

Jesse Dunford Wood was born in Brazil and has worked in some of the world’s best restaurants such as Charlie Trotter’s in Chicago, Gidleigh Park under Michael Caines , VII in Sydney, Gavroche in England and many others. 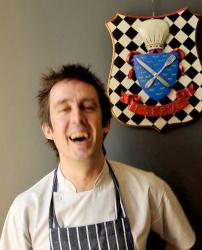 So what’s he doing cooking Chicken Kievs in a leafy London backstreet?

‘I just sort of got fed up with fiddly food,’ he says leading us up the stairs to his first floor kitchen. ‘I wanted to get back to simple, fun food.’ As well as the Chicken Kiev, whose origin is as much a mystery as what goes into the hideous things that call themselves Kievs in the supermarket, he does Gala pies and Arctic Rolls too, all things that appeal to the 70’s schoolboy in us all.

‘We don’t look for these dishes,’ he explains as we gather round the Chef’s Table in the kitchen, ‘we aren’t doing it ironically, they just pop up in conversation and we think yeh, let’s do that!’ So what about Prawn Cocktails or Scotch Eggs coming onto the menu? ‘Ah well they seem to have gone full circle already,’ says Jesse laying out his kit for our demo. ‘From naff, to cool back to naff again. We won’t be doing them.’

Jesse clearly loves his pub environment. The kitchen is cramped and some of the kit is older than he is. He pats a dinosaur of a mixer affectionately. ‘ We got most of this stuff second hand, or maybe third hand. It works well, why pay more?’

The staff have to constantly squeeze past each other and us to get to their jobs but the atmosphere is genial and relaxed, there’s none of the sterile focus you see so often in restaurant kitchens. Not that Jesse is slack, he manages to be everywhere at once and nothing escapes his notice as he calls out orders to the team he can’t actually see around the corner of his L shaped kitchen. 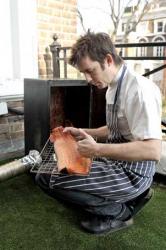 The Chef’s Table is old and battered and really is right slap bang in the kitchen; it’s no token gesture. Next door is a more formal dining room where pictures by Jesse’s father deck the walls and there is a small astroturfed balcony onto which Jesse leads us onto so we can see his salmon smoker.

An electric burner is ducted to what looks suspiciously like an old fridge painted black and with an entrance hole in its side. The cold smoke from the burner wafts around the slabs of salmon on the racks and chimneys out from the top producing a glorious smell that drifts down towards the gardens and no doubt onto the well-heeled neighbours too. The salmon looks terrific, so simple and yet so delicious.

Animatedly discussing whether he can get a beehive or two onto the balcony, Jesse ducks back through the sash window and leads us back to the kitchen. He’s going to show us how the Chicken Kiev is made and then served on a hash brownie and coleslaw, as well as plate us up a slice of Gala Pie on salad with mushroom ketchup. Sounds delicious, I love a slice of pie and the egg in the middle is such a treat when done properly as it is here.

So without further ado, over to Jesse. Simply click on the play button and be transported back to the 70s, but this time with taste!