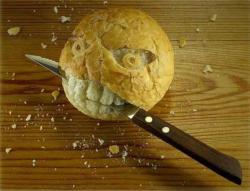 The latest episode in a show that attempts to resuscitate the lacklustre British palate started with restaurateur and part-time Frenchman Michel Roux Jr exclaiming: ‘I’m Michel Roux and I’m passionate about bread.” From these unpromising beginnings you wonder how Roux is going to make a 30 min programme on bread interesting, and to give him credit, he tries.

Despite having little to say about bread that doesn’t fall into the category of sentimental rhetoric, Roux fondles and salivates his way through a range of crusty loaves from artisan bakers ‘You’ve put yourself into this bread, and that turns me on,” while lambasting the British public for their love of disgusting fake bread.

In one memorable sequence he meets a fellow bread-lover who reads out the ingredients in a commercial loaf, during which Roux gives us a facial commentary that runs the gamut from disbelief to the kind of horror usually reserved for depraved acts of violence, before crushing the offending slice into a dough ball. 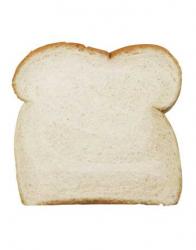 Despite an upbeat delivery, the show’s shallow engagement with the deeper issues at hand was palpable. As is often the case with programs that wax lyrical about good food, the economic issues that prevent many people from ever coming within sniffing distance of an artisan loaf were overlooked in favour of Roux romping around the field with some burly wheat threshers: ‘I never thought threshing would be so tiring;” or attempting to justify the £3.50 price-tag on a handmade loaf ‘There’s love in this loaf.”

Eventually, Roux steels himself to face the opposition and goes to see the head of a commercial bread factory. After informing the manager that in France there’s a boulangerie on every corner, he slam-dunks the theory that fake-bread pushers are responsible for misleading the British public, who don’t really know anything about good food and therefore cannot be held responsible. Surprisingly, the manager of Fake Bread Inc rejects the accusation and seems rather irritated by Roux rubbishing both his livelihood and the intelligence of the British public.

After all this it was back to Maison Roux to cook up a typical French meal which illustrated the ingenious use of good bread. If my reference to Roux’s nationality sounds facetious it is justifiably so, as Roux made much of it throughout the show, the patronising content of which often verged on unintentional self-parody.

The culinary practices of any country are subject to improvement, and in the light of failing to say anything constructive or perceptive about the way we live, this exercise was just as crass as letting Blumenthal and his pocket full of kryptonite loose in the French provinces, or sending in Jamie Oliver to educate our Gallic friends on the transportation of livestock.