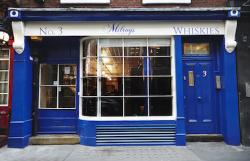 There’s something Harry Potter-ish about Milroy’s Whisky bar. It has a quaint Victorian blue shop-front faÃƒÂ§ade in the old-fashioned part of Soho at the top of Greek Street. Inside it is a mixture of traditional whisky shop Ã¢â‚¬â€œMilroy’s have been selling the amber nectar here since 1964 – and a serious small bar. A determined group of sniffers and tasters are perched in the 12 seater bar savouring from a selection of over 250 whiskys, poured at 35ml rather than 25ml (a whisky locker and key is offered to anyone who purchases a bottle of whisky over £200 at the bar).

The whisky tasting bar is a space where customers can try before they buy, learn about the history of whisky or take part in a tasting event. Milroy’s sell their existing range of own branded whisky and independent bottles, some of which are exclusive to the store, as well as a strong range of whiskies from around the world. 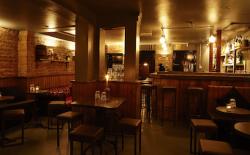 But there’s more to Milroy’s than meets the eye – or even the palette. At the back of the creaky ground floor bar, behind the precious bottles of malt and rye there is a mysterious bookcase. Push it and you are at the top of a secret staircase leading downstairs to The Vault. Entering the shop and heading downstairs gives a sense that you are in the know, arriving at a hidden gem below London’s cobbled streets.

In the corner of the dark cavernous bar what look like a trainee wizard is concocting a brew using smoke, brightly coloured liquids and a magical flick of his wrist.

It turns out to be barman Natolino making the Smoking Gun, one of the bar’s signature cocktails. He is smoking a cocktail glass ready for a heady mix of straight corn whisky, Oloroso sherry, Earl Grey and brown sugar.

The latest addition to the London cocktail scene, The Vault opened its trompe d’oeil door two weeks ago and is already Soho’s worst kept secret. The 55 seater cocktail bar, hidden in the basement is owned by Simo, formerly of Coal Vaults, who promises to take London’s oldest existing whisky specialist and breathe new life into the brand, giving whisky the attention it deserves and lure cocktail drinkers into his basement with some unusual creations. 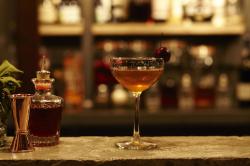 Simo says’I wanted to build the already established Milroy’s brand, bringing it back to its former glory and making it a name synonymous with whisky once again. We also wanted to create a cocktail bar hidden away from the world where people can escape, relax and enjoy a good drink.’

The bar serves up original seasonal cocktails made with home infused spirits and fresh juices. Highlights include the Di Barrel, Blue Moon, Tutti Frutti and Estilo Viejo. Cheese and meat boards offered are plentiful. There are also craft beers and wines, which change seasonally.

A private’Barrel Room’ – shaped as it’s named – with enough space to seat 12 people is also tucked away at the back of The Vault.

It looks like a great place for a secretive meeting or a cosy liaison.

Milroy’s of Soho was established in 1964 by John and Wallace Milroy. The Milroy brothers are credited with bringing single malt whisky from Scotland and establishing it in London. The first of its kind, it is the oldest whisky specialist and shop in London. Even before Milroy brothers took over in 1964 the space had been used as a liquor shop.

Milroy’s Of Soho can be found at 3 Greek Street, London, W1D 4NX.