The region’s wines are well known, the region less so. Nick Harman attends the yearly festival of art, culture food and wine in Minervois, Languedoc-Roussillon.

Red suitcases stand silently on stone islands by the banks of the River Cesse, one of the two rivers whose deep gorges have defended the picture-perfect village of Minerve through the ages. It’s been captured only once, in 1210, when Simon De Montfort’s army smashed the

drinking well with massive stone catapults, the largest wryly named’bad neighbour’. Forced to choose death by dehydration or to surrender, the inhabitants chose the latter and 140 Cathar refugees,’the Perfects’ who refused to give up their faith, were then put to death on the Pope’s orders.

The suitcases symbolise flight and extermination and are just some of the otherwise cheerful installations created by local sculptors for Les Grands Chemins en Minervois, an annual festival in the region. Each chemin, or’path’, takes art, food or wine as its theme and guides the visitor through the richness of the area and of its artists, whether they work with a corkscrew, a paintbrush or a frying pan.

Carcassonne, the town where my own’chemin’ started, is around 90 minutes by air from London and impresses straight away. One of the most perfectly preserved medieval old towns in Europe, it’s reputedly the inspiration for the castle in Disney’s Sleeping Beauty and its high walls surround a glorious muddle of narrow winding car-free lanes and ancient buildings. 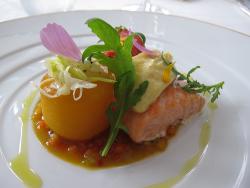 It’s a place to wander back in time, yet outside its walls at Restaurant 111 in the remarkable hotel of the same name, I was served modernist cuisine from chef Michel Del Burgo a man with a stunning cheffing CV, in a room seemingly made for astronauts.

A dashing sommelier with a Salvador Dali moustache poured local wines to go with my fabulous spelt risotto with wild mushrooms, steamed salmon with saffron aioli and finally a modern apple tarte tatin with cider and cardamom. The spice another reminder of the influences of Spain and North Africa here.

From Carcassonne it then took 45 minutes to reach my hotel in the small town of Siran. I drove across a flat plain, the Pyrenees massive in the distance glimpsed through endless vineyards their last leaves golden with autumn colours, and past groves of olive trees their weathered trunks hunkering down to await spring and the blasting Mediterranean heat to come.

I quickly dropped my bags at the 15th Century Hotel ChÃƒÂ¢teau de Siran, another boutique beauty, and then the car and I groped our way through utter darkness up the Montagne Noire (Ã¢â‚¬Å“Black MountainÃ¢â‚¬Â), gaining altitude sharply and scaring ourselves silly on blind bends. Locals drove up close behind, their headlamps dazzling, before briskly overtaking with Gallic insouciance and disappearing around the next corner.

They too were going to the small village of La Caunette for the Chemins’ opening ceremony with some 12 winemakers offering tastings.  The Languedoc-Roussillon region is the most productive wine region in France and with no spittoons in evidence the evening soon became merry with each winemaker keen to show what he, and often she, could produce. A free buffet of pork in all its variations I declined politely, but I gave the table of bread, cheese and olives a serious battering while checking out the fine exhibition of nature photos of the area.

Next day was overcast and madly windy, but as I walked over the narrow ancient bridge into Minerve, the beauty of the place lifted my spirits.

Guided by FranÃ’Â«oise Frissant :Le Calvez President of the Grands Chemins, through cobbled streets and alleyways, I took in more wine tastings and got my shoes washed when a local winemaker flooded the street with red water. Art was everywhere, the gusto of the artists impressive, and I joined local La Caunette winemaker Pascale Frissant, Francoise’s husband, for lunch at Relais Chantovent one of the best restaurants in Minerve.

A large, wild-haired man who produced his own clasp knife rather than use the ones provided’I’ve never found a knife in a restaurant that wasn’t blunt’ he grunted, Pascal talked enthusiastically of his wines made on the lower slopes of the Black Mountain where the chestnut and olive trees begin to thin out. His Chateau Coupe Rose wines express the local terroir brilliantly and his fame has spread all the way to the USA where reviews have been excellent.

After another delicious lunch it was off to see a wonder of the region, Le Canal du Midi, a waterway begun in 1666 and designed to take warships from the Mediterranean to the Atlantic. Its peaceful legacy is gorgeous and you can hire boats and navigate yourself through pretty villages, stopping only to refuel on diesel, wine and cheese as you go.

I paused at Le Somail to see more Chemins’ art, eat more free food and taste more wine, and then crossed the 17th century Saint-Marcel bridge to visit one of the largest second hand bookshops in Europe, a barn of a place smelling wonderfully of decades old print and paper.

Later that evening I ate in a village hall with all the winemakers, whilst watching a wild and skilful cabaret. My neighbour kept producing examples of his wine for me to try’This one is made with Tempranillo grapes,’ he said.’Isn’t that a bit odd around here?’ I asked.’I’m originally Belgian,’ he replied cheerfully,’so they all think I’m odd anyway.’

Back on the plane the next day, my bottles of wine in the hold, I reflected that Minervois is a strange place but one that I’d be back to with suitcase in hand as soon as possible.

To find out more about Les Grands Chemins and the 2013 program  visit www.les-grands-chemins.fr and for more information and itineraries visit www.sunfrance.com

Ryanair fly to Carcassonne from around £90 return, extra charges apply.