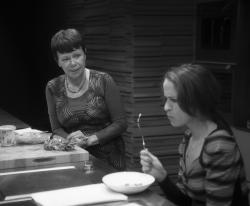 Unconventionally marking the opening of Scholtès’ Centre of Excellence at 98 Wigmore Street, London, a multi-faceted play was staged around the brand’s high-end appliances which are encased in a brave, tactile scheme by designer, Patricia Urquiola.

Like the Scholtès distinctive aesthetic, the play combined the timeless with the contemporary. As it unfolded, a spotlight was cast on the Scholtès appliances, their manifold uses and how cooking, taste, food, and the kitchen itself, is at the heart of our lives.

The play wove together a number of stories exploring the sensation, importance and all-encompassing nature of the kitchen. Food was seen as the essence of life, and the kitchen is the creative hub in which it is created. The kitchen provides the perfect setting for life’s dramas…

It opened unexpectedly. At first, we listened to a chef introducing himself with the standard patter to be expected at an opening event. Then things went awry – a moment of awkwardness, then intimacy, and suddenly we were transported into a series of vibrant scenes designed to resonate differently with each audience member. The vignettes included a chef frustrated with his life whilst remembering his mother’s cooking, a couple trying to keep up with the Jones’s through food, two illicit lovers coming together over a shared meal, a woman remembering her lost love through nostalgic cooking aromas. The kitchen also became the centre of drama through a drunken late night party setting, a frenzied family breakfast dash, and a couple reconciling romantically over food.

As the play developed, the elegance and professionalism of the Scholtès kitchen design was subtly brought to life as actors engaged with the appliances. The Scholtès Centre of Excellence became an intimate setting and a glorious set where life was celebrated through food and design – a place where people are at their most comfortable but also their most vulnerable.

‘The design of Scholtès’ kitchen appliances wants to create the perfect balance between reason and emotion.’