They get a bit of a bad press do mushrooms. There are the naughty ones that make you see pretty colours, the other ones that turn you into a berserk Viking bent on rape, and perhaps some light pillage if time allows, and then there are the ones that kill you stone dead.

In this country we tend to view any mushroom not sanctified and certified by a supermarket box with suspicion, yet our wild mushrooms are profuse. Wily foreigners snap them up to eat with cries of delight while we look enviously on secretly hoping for them to suddenly collapse clutching their stomachs.

So consider the humble mushroom, virtually fat free, full of B vitamins, part of our 5 a day, filling, packed with antioxidants and minerals and sustainable when cultivated. Wild ones, it should be pointed out should be picked with care, because even if you can tell a Total Destroyer Of Your Liver from a cuddly Cepe, you can damage their environment all too easily with bad picking habits. 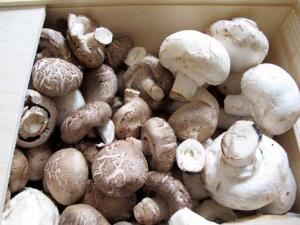 The Mushroom Bureau exists to educate us on mushrooms and today have got Ed Baines chef and co-owner of Randall & Aubin in Soho and Richard Ehrlich author of a book called The Green Kitchen, to wow us with recipes cooked on the spot.

Ed Baines is first up to the pass, easily recognisable from his regular TV appearances and he begins to knock up an Aromatic Mushroom Curry by blitzing coriander stalks, chilli, garlic, spring onion and chilli. Over the roar of the chopper he tells us just how simple this is to make at home. Frying off fenugreek and cumin he adds copious amounts of butter, the herb puree and some yoghurt until the fat splits away. In go the mushrooms in nice chunky chunks, some garam masala, turmeric, salt, lemon juice and cream. Fifteen minutes later it only needs some hard-boiled eggs added to be ready.

It’s a dangerous combination, curry and hard-boiled eggs, a real Viz supper, but it tastes okay. It’s a bit bitter, but as Ed points out, he has hurried this demo. Longer slower cooking would have been better.

More successful is a dish of chestnut mushrooms with spinach sauce served with lots of parmesan. A classic Italian dish really that would only be improved IMHO by also using some dried mushrooms as well as their soaking liquor.

Now up to the oche comes Richard Ehrlich attired exactly as you might expect a Guardian columnist to be decked out – i.e. geography master who got dressed in the dark. Small of stature he walks around the kitchen as if he has a kilo or two of mushrooms secreted in his boxers and, to my surprise, has an American accent. His wardrobe also includes a bit of a hair shirt and he tells us how wrong we are to put an oven on for an hour just to roast a few pine nuts. 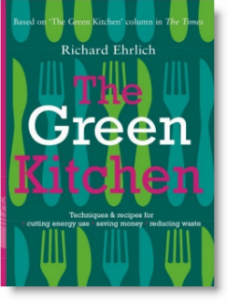 I happen to agree actually, but while Richard is concerned about saving the planet, I am more concerned about cutting my bills, which goes to show that our incomes plainly differ.

Richard is a big fan of the microwave and is horrified to hear that most of us don’t actually cook with ours, preferring to defrost meat and reheat meals instead. He gently chides us about that and in doing so forgets to add the olive oil to the recipe he is making – stuffed mushrooms with crab, spring onion and chives. He nukes the big flat mushrooms and then fills them with his stuffing before nuking them some more for luck. They taste pretty good, apart from the crab shell, but personally I think oven roasting mushrooms intensifies the flavour by driving out more water, while microwaving makes them a bit flaccid and slimy.

He is also, as am I, a fan of making a lot of one dish and freezing the rest, this makes best use of energy as well as providing near instant meals. Presumably the use of a freezer does not invalidate the energy saving aspect.

Mushroom duxelles are a case in point, mushrooms cooked almost dry with butter and shallots can be reheated out of the freezer as a topping for baked potatoes or a canapé on some toast, as Richard does here. Quite nice really, but I can’t help feeling a dinner party chez Ehrlich would have a big 1970s feel to it, with a nut roast rearing its head at some point and his bookshelves supported by painted house bricks.

That aside he makes good sense about using lids on pots and the modern, microwaveable, pressure cooker gadgets avaiilable to ease our energy consumption and to speed up cooking.

So with so much going for the little fellers, it’s time to make room for the mushrooms as the 80s TV as campaign used to say.

Richard Ehrlich and Juliette Kellow have created a useful booklet called Mushrooms Make Sense packed with recipes, nutritional advice and mushroom facts and you can download that here.

Ed Baines’ set of recipes can be downloaded here.

Find out more at www.mushroom-uk.com