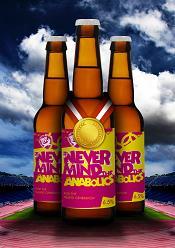 So those barmy blokes at Brewdog are at it again. This time aiming to’take the wheels off the corporate bandwagon’ of London’s summer of sport. With beer, of course.

They’ve taken a swipe at the ‘tenuous sponsorship deals from fast food chains and global mega breweries’ by releasing their limited edition Never Mind the Anabolics – using eight ingredients that are banned for professional athletes.

And, Brewdog being Brewdog, they’ve promised a percentage of proceeds from sales of the beer will go…towards a new surfboard for surfing dog called Abbie. Yes. A surfing board for a dog.

Anyway. The Scottish brewers, famous for their tabloid-friendly wacky brews like the record-breaking 55% End of History, have published a video to welcome in the new beer and a Twitter campaign using the hashtag #FakeTheStage.

James Watt, cofounder of Brewdog, said: “It seems a beer laced with performance enhancing ingredients isn’t actually illegal, but it is definitely frowned upon. However, we don’t think Never Mind the Anabolics is as absurd and obnoxious as the tenuous sponsorship deals from fast food chains and global mega breweries that seem to define the people’s games.

“A burger, can of fizzy pop and an industrial lager are not the most ideal preparation for the steeple chase or the dressage (for human or horse). So we decided to give the athletes something that was going to make them happier and better. A way to relax before a big event and at the same time, increase your chances of winning.Ã¢â‚¬Â

Ã¢â‚¬Å“Never Mind the Anabolics is a beer that peels the thick mask of saccharine marketing shtick from what should be the greatest event London has ever seen. We aren’t the only people that see the funny side of the games’ relentless marketing Ã¢â‚¬â€œ now those people have a beer to represent them.Ã¢â‚¬Â