Don’t ask yourself ‘What are people going to like?” We already know the answer to that. Budweiser, MacDonald’s, Yellow Tail. The minute you start asking what the people are going to like you might as well give it up.’

Garrett Oliver is a man who knows what he likes. Brewmaster at the Brooklyn Brewery and editor of the new Oxford Companion to Beer, he often likens the art of making beer to any other creative expression. 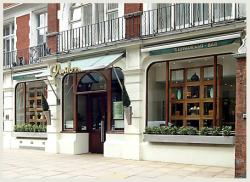 He wouldn’t be wrong. The conversation during our boozy lunch at Quilon, solicited comments that could be transposed to any gathering of creative’s types. Talk of selling out, inspiration, corporatisation, what the kids at university are doing and even a bit of industry one-upmanship involving name dropping, hop-naming and beer lingo that got lost on the likes of me. But then what would you expect when you put Garrett Oliver, Oz Clarke and Roger Protz at one table.

We were gathered to celebrate the launch of Oliver’s beer bible, The Oxford Companion to Beer. It is the most comprehensive book on beer ever published, featuring 160 experts covering more than 1,100 subjects and including some never before documented practices and techniques like dry-hopping and cider brewing.

‘People judge a restaurant by the beer they serve. If they don’t have a selection of craft beers then chances are they won’t order the fish’. Oliver was on fire all afternoon, spilling pearls of industry wisdom. His theory was that if an establishment can’t get the beer right, then the customer wouldn’t trust that they knew what they were doing.

Craft beers are making a huge come back and it is thanks to this shift that beers with more character are being developed and enjoyed. At Quilon, chef Sriram Vishwanathan Aylur was awarded the prestigious ‘Beer Drinker of the Year” by the All-Party Parliamentary Beer Group. He has created a special five-course beer tasting menu that improves on the old beer and curry coupling. 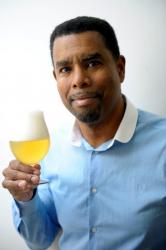 Even Oz Clarke prefers a beer with curry. ‘Even though there’s a movement towards pairing wines with curry, sometimes with a very spicy curry the chemistry of the tanins and high alcoholic volume reacts on the tongue and it becomes painful. It hurts.’

There were no sore tongues at this table as we made our way through a fine selection of beers with our Indian tasting menu, including lovely fizzy Ceilidh on arrival served in long, lean glasses like champagne, a light, honeyed 312 Urban Wheat Ale, a heavy Chimay Red and a floral Chalky’s Bite but the real star was Oliver’s own special brew. Called ‘The Companion’ and specially brewed for the release of the book, this beer came in a bottle corked like a sparkling wine because it is re-fermented inside the bottle. Served to us in white wine glasses, the foamy head gave way to a rich, amber liquid. It almost didn’t taste like beer at all. The 55% wheat beer was light, fruity and flavoursome.

Apparently special new floor malts were created for The Companion and it was at that point that I realised I had no idea what they were talking about. Oliver mentioned a floor malt he had worked on in the past. Floor malt is literally barley that is spread on the floor to germinate and produce malt. Oliver himself helped to rake the barley by hand because of the robust germination of the particular type of grain which cause the barley to become entangled in a matter of hours. They called that brew The Backbreaker. Oliver also talked about the differences they discovered when comparing manual and mechanical processing techniques. The manually turned malts produced flavours and quality far better than the automatic methods.

Oliver suggests that’s why mainstream beers all taste the same. They’re all too concerned with the rules and with minimising risk that they’ve forgotten what beer should taste like. Oz nailed it when he said that ‘risk aversion is the enemy of character’.