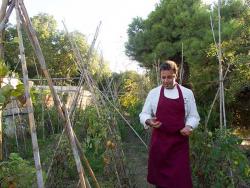 At the Phoenicia Hotel they take luxury and food very seriously. Nick Harman goes into their garden to meet the head chef and to taste the Maltese difference.

Saul bounds away up the vegetable patch like a puppy in an apron, still talking to me over his shoulder. Then, after grabbing a few tomatoes off the vine, he comes hurrying back.’The freshness is fantastic,’ he said biting into one’and with the kitchen just over there it gets straight to the plate.’ Saul could be any keen cook enthusing over his vegetable plot, but this particular patch is a massive seven and a half acres in size. It’s the back garden of the Phoenicia Hotel, Malta and Saul’s the Head Chef.

The gardens are grand and have bird’s eye views over the harbour, especially from the luxurious Bastion swimming pool. These verdant acres have been many things since construction began on the hotel in 1939, including being bombed in the war and used as a children’s playground, although no one is saying which did the worst damage. 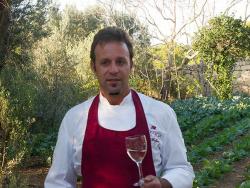 Now Saul has the remit to use large parts of it for the kitchen’s needs, a new use which will not only enhance the gardens’ pleasure for guests wandering around in it, but will have a great influence on the dishes he serves in the hotel’s fine dining Pegasus restaurant.

Only less than a year into the project there is already abundance. Saul points out rows of peppers, aubergines, courgettes lettuces and herbs.’They just don’t stop growing,’ he says cheerfully, which as he explains is a result of Malta’s benign climate. It’s now mid November and the sun is as pleasantly warm as a perfect English afternoon, although come summer it could reach as high as 40C. 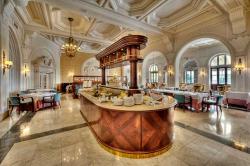 By then Saul will have more ground dug up ready to be used and he is fervent about the possibilities of the produce and about the self-sustaining nature of the plot, including creating compost from the kitchen waste.’Eighty percent of the herbs and vegetables we use are coming from the garden and we buy our seafood from only three local boats, because for me the provenance and freshness are crucial to my Maltese cuisine’.

Saul is himself Israeli with a strong love of Mediterranean cuisine. He’s cooked all over the world but he’s delighted to have recently got this job and to have such strong support from the hotel management for his horticulture. He has a vision for Pegasus that will set it apart from the average restaurant in Malta and it’s one the owners share. 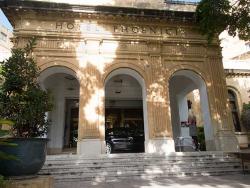 The hotel itself already stands out; a 5 star luxury hotel in the grand old manner, it sits across from the main entrance to the Maltese capital Valletta as assured and as cool as a dowager Duchess quietly confident of her style and rank. Built originally by Lord and Lady Strickland to cater for the upper class wives and families of the British officers of the pre-second world war Mediterranean fleet, it was intended from the start to be a match for any of the best hotels in mainland Europe. 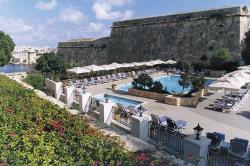 Inside the walls are of pristine white Maltese stone, so perfect they didn’t need plastering. Everywhere downstairs in the round Palm Court Lounge is bathed in light and air and you walk in feeling as spry and as refined as Noel Coward, who is in fact pictured on the wall in the classic Club bar, his WWII army outfit somehow both baggy and stylish at the same time. 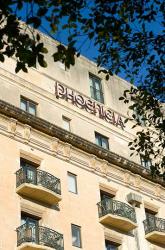 Unusually chevron shaped, the hotel is both expansive and in its way compact, the owners have resisted any temptation to make the generous rooms smaller in order to cram more guests in, and the rooms are furnished in a way that would be recognisable to any time travellers from the 1940s.

There are of course all important modern touches such as air conditioning, flat screen TV and internet, but also charming period features, such as deep china bathroom sinks that have the plug on a chain, and not one of those annoying lever action things that always seem to let the water ooze out. 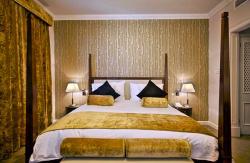 It all adds up to a rather superior and unique experience, a taste of the past made effective in the modern world. Staff smile and greet you wherever you meet them and all are at ease with each other. You get a sense of family pride, from the manager roaming the halls, to the man mopping the marble floor. 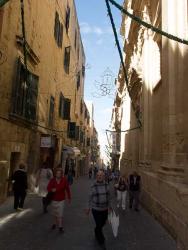 After meeting Saul in his garden I trekked back to the back door and up past the vast ballroom to wander across the road past the Triton fountains and through the main gate of Valletta.

Here modern truly meets ancient – the bombed out theatre close to the entrance has been reimagined as an open air theatre, seeing as how the roof was already off, but the government buildings are now being rebuilt in cutting edge modernist style. The grid of streets is still dominated by ancient buildings and the grand’auberges’ once home to the various branches of the Knights of St John, and by the bulk of St John’s co cathedral, home to the remarkable and enormous painting of Ã¢â‚¬ËœThe Beheading of John the Baptist’ by Caravaggio.

Not a cheerful subject to be sure, but the painting is superb and can only be truly appreciated by standing in front of it. Thankfully all forms of photo taking are banned, so for once visitors stop and think instead of snapping and running. 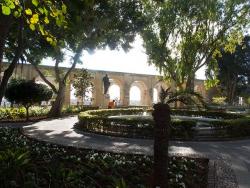 From the pretty Upper Barrakka gardens, a few minutes further walk on, you’re made dizzy by a sweeping panorama of Malta’s massive Grand Harbour that makes even the gigantic cruise liners look small.

Back at the Phoenix in the Phoenicia I get to see what Saul can do with his garden produce. A starter of pumpkin and lentil veloutÃƒÂ©, crispy calamari on a petit salad was a perfect example, the veloute poured at table and packed with flavour.

A mid course of risotto with porcini mushrooms, coffee dust buffalo mozzarella foam and red berries was creative, without being oppressive, and the main of juicy fresh red Maltese prawns with Grand Marnier emulsion served with nuts, grilled pumpkins and coral beans, was a riot of texture and taste. Fine cooking with playful touches, as well as grand gestures.

With it I drank wines from the Meridiana wine estate, a fairly new estate from 1987 built on the site of an old World War II airfield, its old control tower now amalgamated into the main winery buildings and with a view of the ancient city of Mdina. Here they produce wines with a definite Maltese character and a rather excellent Syrah. Few of the wines leave the island except in suitcases, as the production is small and the local demand high.

My turn to leave comes the next morning, after a superb breakfast overlooking Saul’s garden and eating a delicious cooked omelette from the hot breakfast station. Just like everything else at the Phoenicia breakfast is done perfectly and in the grand manner.

The manager tells me as I leave that the Phoenicia was once the departure lounge for British Airways; back in the olden days English visitors would check in and present their passports here before being bussed to the then new airport. It seems entirely appropriate somehow, another part of the great history of this classic hotel that’s flying in the face of mediocrity and facing up to the future. 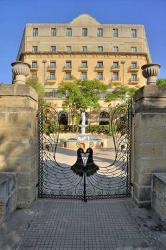 Rooms at Phoenicia Hotel start from just £55 per person per night, based on two sharing on a room only basis, for advance purchase online bookings with minimum three-night stay. To book visit www.phoeniciamalta.com or call 0800 862 0025.

For more information on holidays in Malta and Gozo see www.visitmalta.com