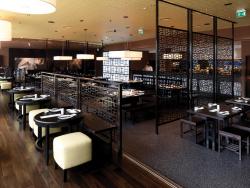 This spring, Ping Pong has hit upon the city of Xi’an along the Silk Road whose dishes it showcases in its new menu. Beef, lamb, jellies and dates are pinging their way from old China to Ping Pong’s 11 locations across London.

Particularly moreish and looking like beautiful, bloody earlobes, are the beef and cumin dumplings made from flash fried beef and chives in a red beetroot pastry. There’s a cute, bluesy and rich dim sum of lamb and Chinese dates rice pot, a good, sticky gooey thing.

Also, the dragon punch made from Bacardi and prickly pear puree creates interesting texture by soaking its basil seeds in water which renders them into jelly crunches, a bit like the seeds of a passion fruit. It comes with an orange, alcoholic button of jelly which at some point you eat with the drink, unless you choose to just admire it.

Dim sum, I didn’t know, means roughly little morsels from the heart to share, rather than the dumpling parcels I’d assumed. I also discovered that dim sum, on trying to make sum at Ping Pong’s Bread Street location, are pretty hard to master.

I tried creating the ‘king of dumplings, the prawn Har Gau, known for its shell like appearance, considered the ultimate test of a dim sum chef’s skill”- this is what the blurb said.

They may look simple but Ping Pong chef Vinata Frans showed us how you pleat, fold and squeeze the little white baubles until they look like sedentary octopi. Mine simply tore or resembled elephant feet and Cornish pasties.

Other good dim sum on the menu include prawns on toast and pork Shu Mal (pork and king prawns in open pastry topped with a Chinese wolfberry).

Ping Pong styles itself as a 21st century teahouse with cocktails, dim sum and teas. Its MD Jean-Michel Orieux, says it attracts mainly women aged 24-36 who like to share their food like tapas. ‘The food is playful but serious,” he says, and with jelly buttons and bloody earlobes, I’d tend to agree.