So you want hot food at a festival or want to camp out with a bit of style? Nick discovers the amazing Prakti stove, the best bit of kit he’s seen all year. 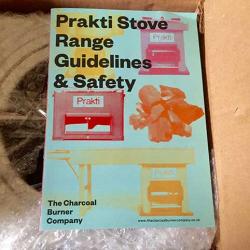 It’s blowing a fierce gale in our South London garden and by the light of my phone I can see at least one fence is flapping badly. I could rush over with a mouth full of 3 inch nails and a big hammer but I have more pressing concerns. It’s time to turn over my pork chops.

Out here in the dark on the garden table the Prakti stove is glowing cheerfully and chucking out considerable heat considering its diminutive size. On the top my frying pan is seriously sizzling up my Turner and George chops and I only lit the device about ten minutes ago.

Prakti stoves come from India and used often for street stalls, or just as a day to day home stove. They are masterpieces of pared down efficiency – rather like a Citroen 2CV, nothing is superfluous to the purpose.

They come in two types, wood or charcoal, and each has simple grab handles for moving about easily. The wood one means that in theory you could take it anywhere – festivals, camping or picnicking and be self-sufficient for as long as you could find wood to burn.

We were loaned the charcoal version, the Rocket Stove, but in fact the Prakti uses so little charcoal that a carrier bag’s worth would see you through quite a few cook outs when away from home as it’s very fuel efficient. 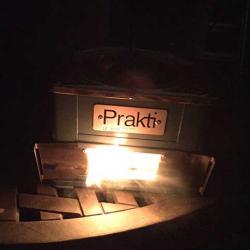 Lighting it, even in very strong winds is a breeze. We gauged where the wind was coming from, using the scientific wet finger method, and as it was blowing so fiercely we positioned the stove so that the draught door was on the other side.

A couple of handfuls of lump charcoal in the top, a lit Zip in the ash tray below and the draught doors slid open just enough to get air, in but not the complete gale, and we were off.

I ran indoors to check on the onions caramelising in the oven and get some more wine and when I emerged again ten minutes later the tops of the charcoals were already turning red. The two simple sliding doors on the Prakti easily move back and forth to regulate the draught and so we closed them down a bit more, as plenty of oxygen was getting in, and plonked the saucepan on top. 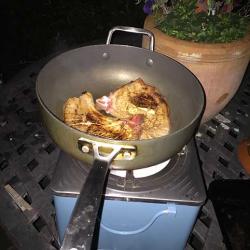 The shape of the Prakti top means that you can also set a wok in it easily too and it’s big and sturdy enough to take a decent sized saucepan of water as well and soon bring it to a boil. In fact it’s very prakti-cal, as advertised. You can of course put the usual BBQ things on top too like sausages, kebabs and vegetables simply using a wire grill.

The chops cooked well and quickly on that massive heat.  One advantage to cooking them outside was that when searing the fatty edges the resulting clouds of smoke were dissipated across the gardens and not into the sitting room. Probably got a few foxes excited, too.

The resulting chops had excellent colour, the meat was tinged gently with the charcoal aroma and the fat crispy and melty all at once. I don’t think I could have achieved this result on the gas oven. 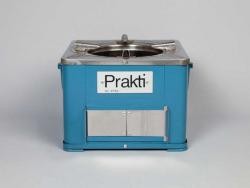 I loved this little box and I’m not alone, Yianni Papoutsis of MEATliquor is on record as loving his too. He even uses his in the restaurant kitchen, (note do NOT try this at home, he has a massive extractor to take away the dangerous fumes but you don’t and will probably die).

I can see these being the thing to have in the garden or balcony for those that love BBQ but don’t have much space. They are safer than any of those tin things on Bambi legs; although it is advisable to make sure what you put it on can take heat. Put down some tin foil first or get a metal sheet.

It’s a magic cube it really is and it’s bound to at every street food gathering next year so get yours in early.

Praktis were designed and are made in Chennai, India, to empower people especially women to start their own cooking businesses and over here street fooders are catching on fast.  In the UK Prakti donates 3% of every sale to the Refugee Council.