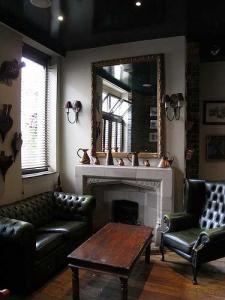 I thought I was going to lose our intern Ellie when chef at the Prince of Wales Dom Robinson did the first lobster in. No mucking about here, one minute it’s a live lobby waving its feelers around cheerfully, then it’s placed on a board and great big knife is stuck through its head with juice splattering everywhere. It’s not something you see every day and it’s a bit brutal for our girl as she turns away quickly.

Dom is dismissive of my bleats about putting it in the freezer first, as he dismembers the still moving lobster with practised ease. ‘It is dead,’ he reassures me, ‘it’s just the nervous system still working. Putting them in the freezer first doesn’t send them to sleep, I don’t think, it just freezes them aliiiiive.’ He draws out the word like a Hammer Horror star, an effect enhanced by his Derbyshire accent.

He’s reaching for another and we are moving out of splash range. It’s a small kitchen here at the Prince of Wales and the team are busy prepping for lunch. A massive tray of veal bones comes roasted out of the oven to be replaced by trays of carrots and onions. ‘We make our stock here all the time’ says Don, wiggling his knife free from another late lobster. His thoughts on a certain chef who advertises stock cubes on the TV are pithy and to the point. He’s not a fan of short cuts

From working in a Michelin starred hotel in Derbyshire to working with Antony Demetre, Tom Aitken and Adam Byatt with a stint working for a Russian family in the South of France as a private chef, Dom has been lucky to have had plenty of varied influences which are reflected in his cooking. 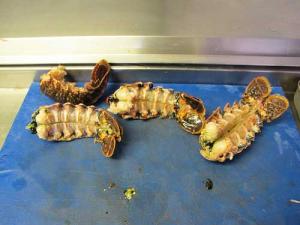 ‘I learnt a lot from Antony he was good, his style is what I like, but each chef I’ve worked for had his own style and the restaurants were all different and you take something away with you from every one. From Antony I’ve taken away some Middle Eastern influences such as cracked wheat and pistachios. Adam Byatt does English style things, but in a very quirky way and I suppose I’ve taken some of that on board too. Tom’s food for me is just brilliant.’

Dom’s cooking has certainly made the Prince of Wales popular. ‘Yes it’s going well, he agrees, ‘ ‘lunch can be a bit varied, busy or quiet and we’re very much a winter pub really, a cosy place with big fires going and a good Sunday lunch. In fact Fridays, Saturdays and Sundays in winter we’re packed. Summer is different as a lot of pubs round here are close to the river, which draws people and also it’s only one stop more on the train to Richmond which is a nice place to be on a sunny weekend.’

‘There are a lot of restaurants around here and so we have to work to deliver something better and something worth paying a bit extra for. Yes we do fish and chips for lunch but those sorts dishes move to the bar menu in the evening when the food in the restaurant is quite different, if I put fish and chips on the menu in the restaurant it would almost be too popular and we wouldn’t sell the more interesting stuff.’ 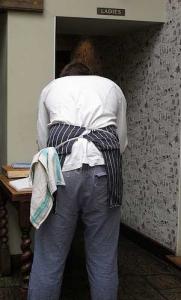 And interesting stuff is where Dom’s heart lies. Take the lobsters, now lying in component parts in boxes. Still, I am rather shocked to see, moving about a bit. ‘These lobsters are for lunch, he explains, ‘lobster thermidor in fact with the meat served in the head and a claw on the side, with fennel and grapefruit salad and triple cooked chips and we use the coral in the hollandaise which sends it bright pink. It’s a classic dish but a bit different.’

I have to question the wisdom of such an expensive ingredient on a pub menu; if it doesn’t sell it’s a bit expensive to throw away isn’t it? ‘It sells,’ Dom tells me firmly. ‘Yes lobster is a bit of a gamble, but on my menu, £16 for a half lobster isn’t exorbitant pricing and we sold four last night, which isn’t bad for a Monday, traditionally a slow night. In fact last night we did 30 covers with just two of us in the kitchen.’

Other dishes Dom has on his menu also defy Gastropub clichés such as a Columbian cassoulet he sourced on his honeymoon, a sea bream gravadlax as well as a dish of wild black bream, pressed moussaka, heritage tomatoes and feta.

It’s a menu that surprises in some areas and comforts in others, he even has a burger on the menu but I bite my tongue so as not to complain about this pandering to the baby-food eating brigade, it’s a lunchtime dish, after all.

As we leave Dom is bantering with his team in Spanish, it’s clear they work well together and that he has a firm grip on his kitchen. The Prince of Wales pulls of the difficult trick of being a pub and a restaurant without the one compromising the other and the credit has to go to Dom’s individual ideas and his clear desire to always get things right.