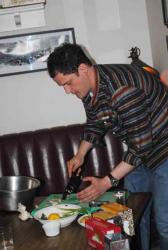 I must start with a confession. I don’t eat Ryvita. As a child of the second half of the 20th century, it featured in my life repeatedly from the age of 10 or so and, during one long school holiday, it made a daily appearance. Two slices slathered with Marmite then topped with two ounces of cottage cheese and a scrunch of black pepper was my lunch. I was, as was typical then, on a perpetual diet – and Ryvita was undeniably diet food.

I can’t remember what was written on its wrappers back then but, today, while the blurbs suggest various low fat cream cheese based toppings, and then cutting down on the dollop of cheese for fewer calories, the emphasis is on the part Ryvita can play in eating ‘that little bit healthier”. It’s a subtle shift that, somehow, lifts Ryvita off the diet food shelf in the supermarket and into the 21st century kitchen cupboard.

Which explains why television chef Valentine Warner was demonstrating interesting things to do to Ryvita in the downstairs back bar of Terroirs near Charing Cross.

He started by stressing that he only endorses products if he munches on them – and munch on Ryvita he always has. So, with the ‘is it only about the money” question out of the way, and very genuinely done, it was time to take the session seriously.

He had set out to make Ryvita ‘unctuous” without going down the pickled herring route – and to satisfy the current trend for instant gratification. Reaching for the Ryvita, scraping it out of the packet as it always seems to do, loading on the Marmite, stretching out the cottage cheese, scrunching on the black pepper and, yes, it did happen pretty fast.

We went through the seasons, starting with spring. It’s almost broad bean time (I knew this as a colleague had been planting them in her vegetable patch last weekend) but Valentine finds it hard to find broad beans – his favourite veg. He should move to Chiswick, I thought, where barrelsful spill out on the pavement outside our local greengrocer, their pods filling my food waste bin every week for not nearly long enough.

Like all chefs, Valentine advocates removing the skins before eating the beans. This tedious task can be therapeutic – but it’s not exactly instantaneous. For me, the definitively broad beany taste lies in the marriage of skin and bean so I often go the lazy route, in favour of flavour. There are times, though, when their vivid, shiny greenness makes almost any salady mix seem a lot more attractive – and it’s definitely worth the time with this spring topping.

Exact ingredients are in the recipe section but, very roughly speaking, and very finely chopped, use tiny new potatoes (in spring season Jersey’s are ideal), young broad beans, quails’ eggs, anchovies, spring onion, a clove of good, new season garlic ‘to give it attitude”, Valentine said, olive oil, lemon juice and a sparing sprinkling of tarragon or mint and you’ve got it. Distribute it generously over a slice of original Ryvita. It worked – but I wasn’t the only one who thought Valentine’s broad bean mixture worthy of being eaten on its own.

Summer follows spring and next came steak tartare. No egg yolk (olive oil instead) and the best fillet steak, hand-chopped not whizzed to retain texture, with chives snipped to Valentine’s very precise specification: ‘the size of a mosquito’s bracelet”. See the recipe section for the full list of ingredients.

Placed, an inch thick, on cracked black pepper Ryvita, this drew the most ‘aaahs” from the crowd – rich but light, pleasingly peppery and with an essential hit of Worcestershire sauce adding a familiar nasal punch. Very good indeed – particularly if you prefer a bit of crunch with your raw steak.

The big debate with all the toppings was ‘bumpy side up or down”. The cracked black pepper Ryvita gives more punch when eaten bumpy side down but Valentine thinks like me – ‘It’s quantity that counts” – and bumpy side up means you can squeeze on more topping (the irregular surface offers more grip and, thank goodness I’m not the only greedy one, provides extra crevices into which deliciousness can lodge). And then tumble off – Ryvita’s little local difficulty is that loose mixtures will slither off but, like butter dribbling down your chin when sucking juicy flesh out of lobster legs and claws, food rushing off Ryvita is half the point.

And then the star of the show appeared, at least in my view and, sorry Valentine, it wasn’t one of your recipes. We were jollied through the session by Nigel Barden, BBC London’s food and drink critic, who had his own ideas. A (he said thin, I say generous) spreading of good cream cheese, chunks of peppered mackerel, slithers of pickled cucumber, a flurry of torn (‘never cut” said Nigel) rocket – on top of the sunflower seed and oat version of Ryvita.

Here, the Ryvita was absolutely essential, its dry crunch balancing the creamy, oily smoothness of the cheese and fish. It was, I realise, (and no one used this overused cheffy term but it fits) a ‘deconstructed” mackerel pâté with typical garnishes – and it would make a thoroughly satisfying lunch. I might even only survive on one slice, though it’s hard to imagine that happening.

Who would have thought that a slice of Ryvita would make a good pud? Take a pot of clotted cream, some Coxes apples gently stewed with ginger, honey, lemon juice and sultanas. Top with chunks of Mejdool dates, chopped walnuts and a hint of orange zest. Spread, at the last minute so it doesn’t go soggy, on sunflower and oat Ryvitas and … it’s almost crumble. Fatal, particularly if you, like me, are on an endless search for reasons to eat cream.

Ryvita first appeared in the roaring twenties, 66 years ago. For the last 40 years, the Ryvita Company has milled its own rye flower in Poole, Dorset, where the company is based. It wasn’t until 1975 that the first new flavour, dark rye, was introduced.

Now there are eight flavours: multigrain, sunflower seeds and oats, pumpkin seeds and oats, sweet onion, cracked black pepper (definitely my favourite) and fruit crunch as well as the dark rye and original. And, as we discovered when we arrived at this unexpectedly fulfilling lunch, the sophisticatedly crunchy Ryvita thins range (multi-seed, sweet chilli, cheddar and cracked black pepper) provides the perfect vehicle for pâtés and dips. After all that greedy gorging, it’s time to go back on a crispbread diet …

See the recipes section for the four Ryvita recipes featured: