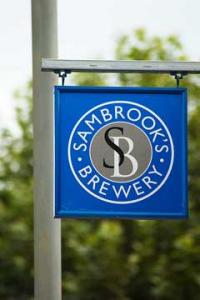 Sambrook’s Brewery, Battersea, is a place full of reinventions.

The brewery’s co-founder, Duncan Sambrook, was a City accountant before he threw in the towel to become a brewer in 2008. The brewery’s premises in Battersea was a television studio prior to having its double-panelled floors stripped bare, the walls resprayed with hygiene paint and 20 barrel-capacity brewing equipment installed, transforming it into a microbrewery in the heart of London. In some respects the whole operation is rather like the revival of the brewing industry, with smaller microbreweries becoming increasingly popular compared to larger industrial manufacturers.

Reinvention has certainly suited Sambrook’s. Since its first cask was tapped in November 2008, over one million pints have been served to thirsty punters across London. Junction, one of its two permanent ales has even won Beer of the Festival at this year’s Battersea Beer Festival. So on a sunny Saturday afternoon, I headed down to Sambrook’s to see what the fuss is all about.

When I arrived for the tour of the brewery I was met by Duncan Sambrook in a reception area decorated to look like a pub. On display at the bar were the pump clips of the cask ales produced by Sambrook’s – Wandle and Junction. The Wandle is named after a tributary of the Thames, from where Sambrook’s draws its water, while the name Junction is derived from Clapham Junction, Sambrook’s nearest station. It all feels very local, which is exactly the ethos that Sambrook’s is trying to maintain – a London brewer making beer for Londoners.

We were also joined by a group of beer connoisseurs from Brighton CAMRA who were very enthusiastic about the pint of Wandle to start the tour. It was light, slightly sweet and very refreshing. 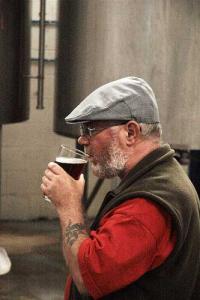 Given that my last tour of a brewery was the Guinness factory in Ireland, I had expected huge containers for the brewing and even bigger warehouses to store the hops and malt. The kind of place where you start to feel drunk just by breathing in. Sambrook’s was tiny in comparison so it was surprising to learn that by brewing four times a week, Sambrook’s actually produces around 27,000 pints. That’s a lot of thirst quenching.

Unlike most breweries, Sambrook’s likes to mill their own malt. It’s so that they get ‘just the right amount of sugar” to kick off the process. That much at least will be drilled into you by the end of the tour.

The milled malt goes into a vat called the mash tun where hot water is sprayed on top to create wort, the brown sugary liquid used for the beer. The wort is then pumped into the copper where it is boiled; hops are also added for flavour and preservation of the beer. The resulting liquid is allowed to cool before it is fermented for six days.

So a week later you have your tasty Wandle or Junction, depending on the mix of malt and hops used, ready to be pumped into firkins, kilderkins or barrels and delivered by Sambrook’s drivers to any of the 120 or so pubs within the M25 that serve their ales.

The tour was a real insight into the world of microbrewing and it’s quite obvious that Duncan Sambrook is as enthusiastic about his brewing now as he was on day one. This is a man who is proud to welcome visitors to his brewery, where tours with tastings are run Mondays to Thursdays plus Saturdays. And of course it wouldn’t be right if we didn’t end the tour with a pint of Sambrook’s other permanent ale; the award-winning, darker, stronger and slightly bitter, Junction.