20 chefs had just 10 ten minutes to make one Scotch egg of their dreams. I had 200 minutes dreaming of what delicious Scotch eggs could be next! 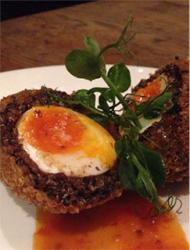 Having grown up eating Scotch eggs they will always remain to have a place in my heart. I reminisce of the days when my friend’s mum would make us each a couple that were so tasty and perfectly slotted in my lunch box for school that I could devour at break; if not sooner.

Now years later and after a lengthy hiatus since my last bite, it all changed a couple weeks back when I discovered the Scotch Egg Challenge Competition. After now having gone I can honestly say I will return for the rest of my time in London, it was brilliant.

Over the course of the evening platters filled with bespoke Scotch eggs came boiling out the kitchen (free of charge) for everyone attending and much like seagulls to a warm chip, hands fervently scrambled to get their mitts on some of the UK’s best Scotch eggs.

The variety was incredible and this year consisted of two categories, Traditional and Unconventional. Now the former consists of eggs with filling such as black pudding and sausage meat and the latter, fillings like quinoa and maca as seen in the photo (left), which had an’interesting’ taste though I must give credit to creativity.

The panel of egg-sperts’blindly’ judged each of the twenty entries based on their taste, presentation and smell, with the winner announced in the esteemed top Yolk awards. This year the Scotch Egg Challenge winners were Chef Calum Franklin from Holborn Dining Room in the Traditional category with a white pudding and sausage creation. In the Unconventional category Princess Victoria’s Nick Maloney won with an inventive Thai Scotch egg that really did taste different and perhaps more akin to a Massaman curry with a boiled egg on top with scattered breadcrumbs.

Including the winners chosen by the panel, a few others really stood out for me. My favourite made by Scotch Tails and filled with super tender pulled pork and caramelised onions, which had a lovely sweet and smoky taste, perfectly crispy shell and runny yolk and was all washed done with a cool pint of bitter.

Over soon before I realised and full with some of the best Scotch eggs I had ever tasted, it was time for me to leave though however I also left filled with excitement to go to next year’s Scotch Egg Challenge.