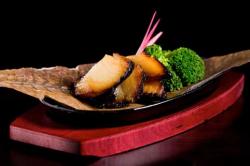 As I wandered under the spaghetti junction near Edgware Road tube station and off the main street in search of See Sushi, I realised that I hadn’t ever eaten in Edgware Road, which should make this meal interesting. Not that this meal was technically a restaurant launch or even a review per say, nope, this was just your standard promotional nine tasting courser on a Thursday evening hosted by one of the head honchos herself: Lucy Mitchell, the Marketing Director at SeeWoo Foods Ltd.

But, to be fair, there’s nothing standard about See Sushi or its umbrella company, SeeWoo, which has been supplying authentic Asian food to restaurants, wholesalers and private customers for four decades and have Michelin-starred joints like Hakkasan on their buyers books.

Tucked away and overlooking the (empty, when I visited) Paddington Basin, the first job of the evening was finding the place. See Sushi relies heavily on word of mouth and repeat custom as there is limited foot traffic past their gleaming glass frontage post five pm. On the night S and I visited it was actually made that little bit harder to find because someone had hilariously moved the sign so that the arrow to the restaurant was pointing at the local Superdrug instead. Clever. Kids today eh?

Inside the sleek restaurant there’s a surprising amount of space with a long sushi bar up against one of the walls offering diners a whole night of sushi and maki theatre to keep them entertained. Before I could worry too much about where everyone else was and why the place was half empty I was quickly ushered around the side of the main room to a small, private space where I found the rest of the blogging masses and their plus ones.

As I leaned in to where the majority were congregated, I realised that they were all sipping from glasses of pink fizz and feasting onÃ¢â‚¬Â¦could it beÃ¢â‚¬Â¦yep, a massive pile of cheese from Neal’s Yard. Call me a traditionalist but, as I recall, Asia isn’t exactly famed for its wedges of nutty, aged cheddar or oozing doorstops of brie. As it turned out, the cheese board was merely set dressing for the star of the evening: a fresh-from-the-kitchen pot of chilli chutney.

So febrile in fact that Lucy’s sister had only perfected the recipe a few days earlier and it was about to make its merry way onto the Way-On production line for the mass market. I only hope the little firecracker keeps its distinctive flavour because it managed to haul itself up to that lofty plain of truly special savoury jams and chutneys, where the overpowering sweetness is firmly beaten down by a firm whack of salty tomato and a feather’s brush of lingering chilli. And yes, it was the perfect accompaniment to that slab of cheddar (and the gyoza that came later incidentally).

Normality re-asserted itself with the arrival of the first of a water banquet of Asian delights and delicacies: platefuls of dressed slivers of butter-soft tuna and chunks of fleshy salmon that I would have happily battled to the death over with the other food writers on my table.

Luckily for all involved this was my first time dining with S as my plus one so I was on my best behaviour and instead chose to use my potential chopstick weapons to carefully lever morsels of sashimi onto his plate, keeping my inner greedy pig at bay. 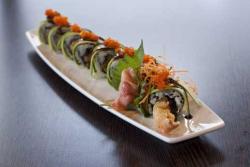 The pig remained sated as the salmon was followed by swirls of avocado and soft shell crab maki and a dragon roll stuffed with eel and tempura prawns, which was swiftly replaced by shards of black cod in marmite-coloured miso coats and a delicately-marinated rectangle of pure white tofu sitting next to an expertly splayed and roasted aubergine and a radish that bore a disturbing resemblance to the talking toadstool in the Mario computer games.

The most unusual thing on the menu was the accompanying Japanese wine – a dangerously drinkable Koshu Soryu that was as clean and soft as a spring meadow and tasted like it had the alcohol content of a light beer.

Koshu wine is like most small-production varieties in the sense that not much makes it out of the source county for non-domestic consumption and the portion that does usually comes with an eye-watering price tag, putting off all but the adventurous owners of fat wallets. If you ever see one on a menu and are feeling flush I urge you to forgo your usual Sauvignon Blanc or Pinot, spend that little bit more and give one of these floral, grassy Koshu numbers a go.

The only downside of the fairy-light meal came in the form of a lukewarm plate of chicken katsu curry. The chicken was as crispy as you could ask for and swimming in a rich pool of brown, spiced sauce, but its rice partner dragged the dish into dangerous double carb territory as it arrived on the plate with a wholly unnecessary cap of mashed potato.

I forgave the katsu because it was followed by a boat’s worth of ice cream Mochi and tropical fruit, although I still can’t decide if I liked those little, gluttonous rice balls filled with mango, black sesame and bitter chocolate ice cream all the more just because they were served on their very own battleship.

The indefatigably charming Lucy had been threatening S that she was going to break out a bottle of Baijiu – a potent Chinese white spirit Ã¢â‚¬â€œ all evening and, with a bit of egging on by me, an ornate bottle with inlaid paintings and two of the smallest glasses I have ever encountered was produced. The reason for the size of the glasses soon became clear as, after one fiery mouthful, I realised that there was no way you could do a shot of that with every course and stay coherent, let alone sober.

Baijiu burn aside, this little restaurant serves up authentic flavours and dishes packed with carefully-sourced and hand-selected products and produce and I hope that more people meander off the main road to discover it.