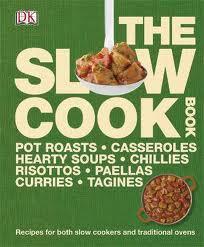 I’m very impatient – so much so that if something takes ninety seconds in the microwave, I’ll put it in for eighty-eight so as to avoid the time spent getting my index finger across the vast expanse of keypad separating the ‘9’ and the ‘0’. I guess the very fact that I use the microwave often enough for this time saving technique to become worthwhile is testament to my reluctance to wait for anything.

My impatience makes cooking a traumatic experience: The idea of spending forty minutes or so on a meal that takes no longer than a quarter of an hour to eat (yes, I wolf my food) upsets me – I feel ripped off.

Given my reluctance to waste time on food preparation, it may seem strange that I would be such a fan of Dorling Kindersley’s new publication, ‘The Slow Cook book’, a compilation of soups, pot roasts, tagines, curries and casseroles all of which are ideally suited to preparation by a slow cooker (the appliance not the person).

Why, when forty minutes is such an unbearably long stretch of time, would I have any interest in a book for which the average prescribed cooking time is eight hours?

Oddly enough, the Slow Cook Book prescribes a method of cooking that suits my impatience fairly well. For one, when slow cooking you rarely spend more than thirty minutes slaving over a hot stove – it’s hard to cook anything from scratch in less time than that.

It also makes a big difference when you do your slaving: Impatient though I may be, I am infinitely more so when I am hungry.

With a Slow Cooker, however, as everything is prepared so far in advance, come dinnertime, you’ve completely forgotten that you had to do any cooking. This not only creates an immensely satisfying illusion of instantaneity, but also of having got a hot meal for no effort whatsoever.

Another virtue of the recipes provided by The Slow Cook Book is that the meals often get better with age. When I gave the Slow Cooked Lamb with Orange and Chestnuts recipe a try, it was very good the first night, but only really came into its own on the second, when the flavours had blended together and the chestnuts and orange had disintegrated into a delicious paste.

The recipes are also incredibly easy to follow, avoiding superfluous details that tend to trip up incompetent cooks such as myself. And for those who feel a slow cooker would simply be one gadget too many in their appliance saturated kitchen, all the recipes also feature instructions for a conventional oven.

Though I didn’t expect to be saying it, the Slow Cook Book is an excellent, and beautifully put together introduction to a strangely appealing way of cooking.