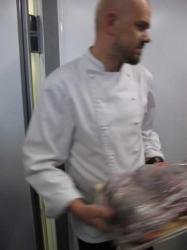 Chef’s rubber Croc shoes seem at odds with the mud we’re tramping through, but then so are his chef’s whites. ‘I’ve got big plans,’ says Lee Streeton Executive Chef at the spanking new Syon Park Waldorf Astoria Hotel while waving his arms around. ‘This land is mine!’

As veg patches go, it’s already a sizeable one. Courgettes are massed in yellow-flowered profusion. ‘We cook those, they go quick,’ Lee says charging up and down the veg beds in the dwindling light pointing out other plants and herbs growing furiously well in his deep organic beds, all sheltered from the worst of the weather by the hotel’s walls and close presence.

Many chefs these days claim to be pulling produce from the restaurant garden, but if you get a chance to peek outside their restaurants you have to wonder who is kidding who. A patch of herbs and a tomato plant do not a vegetable garden make.

Lee is certainly capable of keeping his customers fed from his. A cynical non-foody might say that’s because his dishes are rather tiny. One tomato can probably make ten plates the way Lee does it. I’m being a bit naughty though because, seriously, Lee’s dishes are examples of fine dining restraint and quality and are about textures and tastes combined with seasonality. 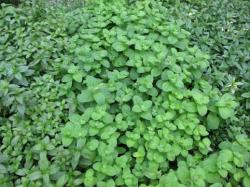 A lot of chefs drone on about seasonality of course; it’s a mantra but it’s certainly something to aim for. Lee has more right than most to champion it though, as he can see clearly each day what’s ready to eat and what isn’t, He only has to walk outside.

His herb garden is magnificent. Basil in sweet profusion so that he could bring in armfuls if he wanted and he’s already thinking of next year. ‘We’re extending,’ he says throwing a mischievous glance at Hotel Manager Dale Macphee, ‘can’t say how much yet but we are already putting in apple and pear trees. Looking forward to ten little bottles of cider next year.”

He has the space to expand. The 137 room hotel is set within the grounds of Syon House, a Grade 1 listed house set in a big country estate on the way out to Heathrow. Quite how large it actually is comes a surprise, the first inkling being the endless ancient wall your car passes on its way to the ground’s entrance. Once inside the revealed parkland extends for what seems like miles, Syon Park house itself sits happily in the land and just a bit further on is the hotel itself.

The Duke and Duchess of Northumberland live in the family home, which must be nice, and like so many aristocrats have turned their estate into an income with space for weddings, the house for filming and of course the sale of land for the new hotel. 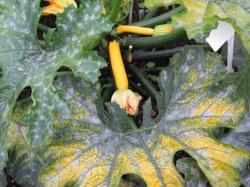 Unashamedly contemporary in its look and feel, the hotel doesn’t seem too much at odds with its surroundings and has yet to bed in through time. In fact through the use of natural materials and curves it sits quite happily when seen from the outside and inside it’s airy and cool with a nice bar and doors to the sculpted gardens and parkland.

Lee’s restaurant, The Capability, is large and his kitchen quite the biggest one I’ve ever seen. Of course, as he points out, it’s not in full use all of the time but it has to be able to cope with the largest catering events a hotel like this can host.

It also sends out food to one of the most unusual Chef’s tables in London, the greenhouse in the garden. Here lucky diners can pass through the shelves of tomatoes and sit around a table whose centrepiece is a massive old butcher’s block. Lee loves it, even though it can be a bit of a logistical headache trundling out the dishes and dealing with the temperatures inside.

‘It’s so not like being in London here.’ he says. ‘The gardener at Syon House brought me over some Puffballs he’d found last week, they went straight on the day’s menu. You don’t get that kind of thing in town do you? He called me up a while back because bees were swarming in the grounds, I rushed out the kitchen and we captured the queen and now have three hives for hotel honey!’

You have to wish Lee luck. He’s making the hotel special for its food when it would be so easy to be merely ordinary. It’s a big challenge, but he has ‘grounds’ to believe he can pull it off.