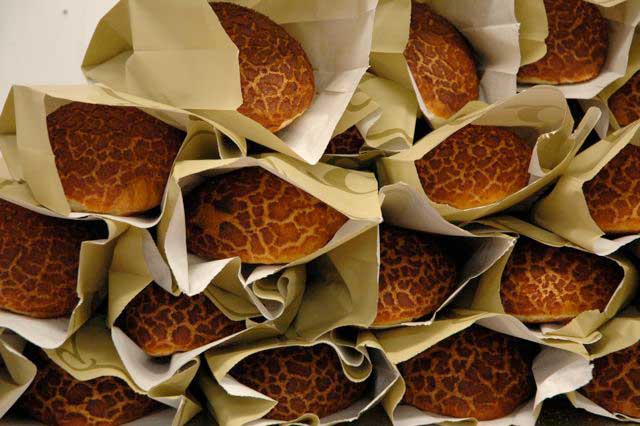 Up in The Bread Factory main office where it’s warm, cosy and smelling deliciously of what else but freshly baked bread, the staff are gently taking the mickey out of one of the accountants. ‘Every morning, first thing, he’s off to the baking floor for his fresh cakes and croissants!” they laugh. He smiles, acknowledging their banter, and then his eyes go all misty and unfocussed. ‘Look,’ his colleague says,’ he’s dreaming about those cakes again!’

It’s a bit of a dream job actually. From the outside you would assume that this building on an industrial estate in Hendon was like all the others, a small warehouse perhaps or a car body shop. Once you go into the little lobby however the clues are all around you – the special disposable sterile ‘mop’ caps that everyone who enters the baking floor must wear, the signs about washing hands and strict cleanliness routines and, of course, that wonderful smell.

Upstairs in the busy office that despite, buzzing with incoming orders, also seems relaxed and friendly, the small kitchenette is just like any other except for a couple of lovely crunchy loaves that the staff have been making toast with. This is a factory with real soul. 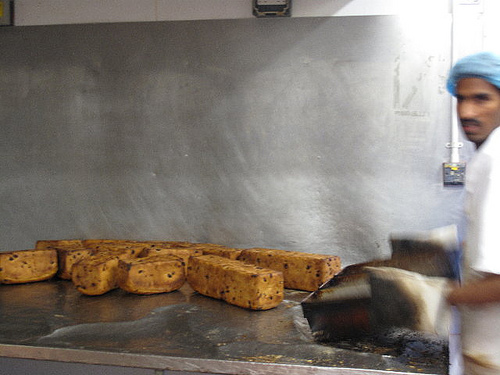 With mop caps on, hands washed, and lab coats on we’re taken into the bakery itself where Head Baker Cyril Denecheau, who has sixty-five bakers to help him meet his very demanding standards, explains the process. ‘The flour!’ he says waving at stacks and stacks of different kinds of bagged flours. ‘This is where it all starts and finishes, if you don’t have first class flour you can never make first class bread. Simple as that.’ Cyril is an acknowledged expert at his craft having begun back in 1995 as a commis chef he was soon drawn to the dough side working with Jason Warwick and then Rowley Leigh at Kensington Place. ‘Rowley made us all rotate through the different sections- vegetables, meat, sauce, pastry,’ he explains as we pass into the next area, ‘to see how each thing was done and that teaches you organisation, control of workflow. I learnt a lot.’ Soon though came the call to rejoin Jason now at Mezzo and Cyril was happy to go ‘Jason and I worked together so well, we communicated without words and this is important when you want to make good bread. Jason helped educate me, he showed me books I should read that were simple guides to making the levain, its not difficult in technical terms but it takes time and a feel.’

Carefully lifting the lid of a giant container, one of several in this section, he let’s us quickly peek at a levain. This is the mother yeast culture, an enormous Doctor Who sized lump of dough that is, even as we watch, slowly blowing bubbles. Where you and I use fresh or powdered yeast to make our breads rise, the artisan baker uses levain, he explains. It makes bread with a better structure and aroma. Around 1lb of levain is added to 4lb of basic flour and water dough and the levain left over is ‘fed’ with flour and water to keep it alive and to keep it ready for the next baking. Good levain is crucial to great bread.

‘It’s a process that has been around since the 1600’s.’ says Cyril carefully replacing the lid. ‘It’s part of what we also call the sourdough process. It takes far longer to raise bread with a levain and it’s less predictable than a bakers’ yeast, but it’s far superior.’ Levain is in fact basically just flour and water, which is left exposed to the open air until natural fungus and bacteria safely form and the levain becomes live. Carefully maintained the original levain can last for many years and most master bakers like Cyril will take it with them when they move jobs. 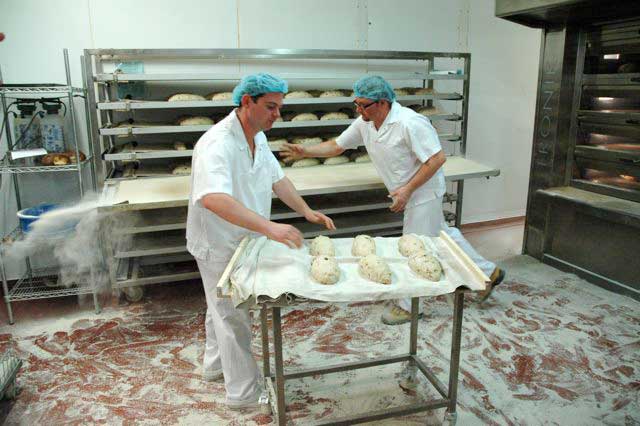 We’re joined by Tom Molnar who together with Ran Avidan approached Gail Stephens, founder of Baker & Spice and owner of the Bread Factory with the idea of not only centralising production but of creating a retail outlet called Gail’s Bakery. This way they felt that the amazing bread previously only available at top restaurants, on airlines and in hotels, delis and and café’s could really come to the High Street.

Tom explains more as Cyril rushes off to oversee his beloved bread. ‘Some artisan bakeries can’t keep the levain alive so they buy it from Germany but not us. We feed ours on yoghurt, apple juice, orange juice it depends whether we need to back off the acidity or increase it. The team here have been working with this original levain since the basement at Baker and Spice and they took it to Park Royal and then they brought it here. A while back some people tried to sell us a machine that would do all the cultivation and maintenance of the levain for us,’ he says shaking his head, ‘but we didn’t want it, it’s not what we know, we’re a touch and feel bakery. Even the grooves in the bread are done by people with knives, not machines!’

He does show us some machines at work, however. ‘These mixers have different torques and different speeds and so will treat the bread differently, recreating how the human hand works. That’s because different doughs need different treatment, the wild yeasts and sourdough mean every day is not the same as the last but we don’t try to over control the environment.’ And as he makes clear, the kneading and shaping is still done by hand with the machines just employed to do some of the more basic, initial work. Even as we talk, his sentences are punctuated by loud bangs as the bakers slam dough onto the wooden work surfaces. ‘All the breads need different approach, here they are whacking it down to activate the yeast, while other breads need a more delicate approach,’ he explains.

Not only that but as he points out, all the breads need different resting times. ‘We use traditional linen and wooden trays to rest the bread. We like to slow the process down which is quite the opposite of what the big bakers do, they want fast cheap bread and we don’t!’

He sounds very enthusiastic for a man who doesn’t actually bake himself, but his commitment is clearly beyond doubt. ‘I worked in the U.S. and Switzerland in various jobs for ten years. No I’m not a baker but I do love bread and I share these guys’ passion. I really got involved to help them the get the process better, to be more efficient without changing standards or quality.’ 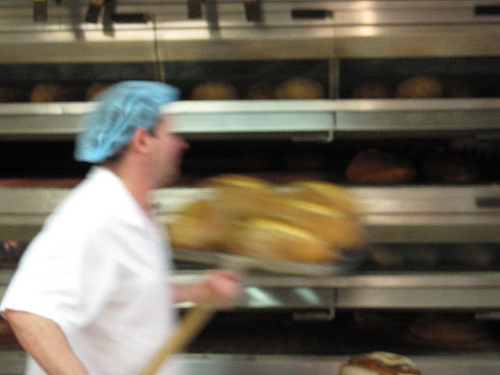 By now we are in the oven room where it’s warm and it gets warmer by the minute. ‘The thing is, ‘Tom says, ‘all the long fermented bread is different in its baking needs. So figuring out exactly when it’s ready to bake is a real art and skill. The head baker is like a big orchestral conductor knowing when to bring things in and when to hold them back. He has to judge it perfectly and you know it’s a beautiful sight at night as the breads start to flow into the ovens.’

The business process man inside him has tried to bring process, but as he explains it’s not going to happen. ‘I’ve tried to map it out analytically, to work out what we can do to facilitate the process and I found it simply doesn’t work that way. Its touch and feel, you can’t do things on automatic. Yes we have timers, but they are for reference only, it’s the baker who decides when the bread comes out, not a machine.’

‘I just find it amazing. A live product! You know we can’t keep those customers who want the bread to be exactly the same day in day out, none of these breads you see here are going to look exactly the same every day, that’s the point! We have consistency not of making absolutely identical loaves, we have consistency of quality. You don’t make bread with a slide rule and our customers appreciate that and there are more and more customers like that coming to us all the time. In fact we could not maintain our quality if we tried to meet the demand for our bread.’

As we leave, walking past racks of beautiful looking breads of all descriptions, he has one last point to make. ‘The guys in here are at the centre of everything,’ he says firmly, ‘they drive the business. And our customers respect the way we work. It’s a basic production line yes, its manufacturing yes, but in an artisan way.’