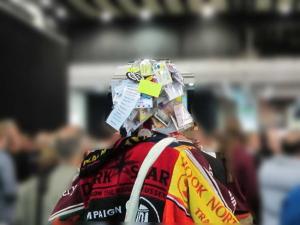 The ghost of Oliver Reed hangs over the The Great British Beer Festival at Earls Court. Far from being a middling actor who surrendered his career, and ultimately his life, to alcohol, here he’s a demi god, although of course he never did things by halves. It was always pints. Boom boom!

You can buy Olly Reed T shirts with other such hilarious gags on them, like a spoof movie poster ‘Oliver Reed and the Raiders of the Lost Cask’, complete with a bad drawing of the man himself, as well as Olly beer mugs and towels. Shame he didn’t live to see it, then again, maybe not.

It’s easy to poke fun at beer lovers, and CAMRA itself has done much to promote negative stereotypes, while at the same time doing an excellent job of reviving beer in this country. Not so long ago we were threatened with drowning under a tidal wave of crappy lager suitable only for fuelling Saturday night fights in the suburbs. Now we have a range of UK brewed beers that is truly awesome and great beers from both small breweries and the big boys, as well as from all over the country. 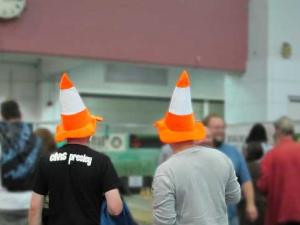 You could say beer is our wine. Different counties produce different beers relevant to their climate, soil and local tastes. Earls Court is a big place but even so the beer producers of the UK have had no problem filling it with a choice that makes you clutch your beer glass (deposit £3.00) tightly as you gaze despairingly at the choice on offer. Where do you start?

By getting some food, of course. There were the usual gourmet burgers on offer, no thanks I’m not a teenager, and foot long Bratwursts in buns. Do I look like a German? There were some very good-looking Ploughman’s, featuring excellent cheeses from around England and Wales, but eating that required a table and they all seemed full.

I found what I wanted with a stall selling deep-fried Whitby scampi and chips. I like deep fried scampi and I’m not ashamed to say it. It was my childhood love, but sadly you won’t find it on many menus today. Here freshly cooked to order in clean oil, the classy crustacean was in my Styrofoam box in minutes and completely eaten not much longer after that. Delicious down to the last battered crumb. 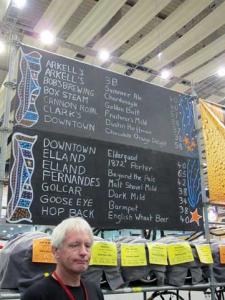 Suitably refreshed it was off to try some beer, now needed rather badly as I had overdone the salt on the chips as usual. Large men with beards blocked the way at every turn and it’s hard to get a barman’s attention when your eye-line is blocked by a bloke wearing a rubber chicken on his head, but even so I made steady progress.

All the bars offer a tiny thimbleful of beer to sample free and a dedicated toper could get pissed as a parrot that way, but it would be a laborious process. Even so, taking these tiny samples is a good way of seeing the remarkable variety on offer, not just across the whole expo but brewery by brewery. As a way of passing a Tuesday afternoon it was perfect.

The crowd were all good-natured, enthusiastic, up for a laugh and, to be honest, only a few were what you might call classic beer-heads. In fact most were young, clean-shaven, well dressed and many even had women with them!

We flock to wine tastings but we shamefully ignore our national drink. The Great British Beer Festival is an excellent way to redress that balance. Go if you possibly can and may the Good Lord Oliver Reed go with you. Amen.