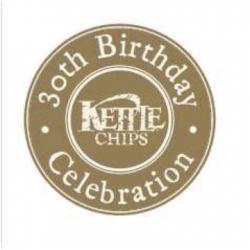 Norwich – home to big names such as Colman’s Mustard and Alan Partridge, AHA! When I were a wee lad I came t’up north to watch Villa play out a miserable 0-0 draw with the mighty Canaries. I should come here more often, (not for the football), it’s very picturesque and more importantly, there’s a factory here that makes crisps, epic.

Kettle Chips celebrates its 30th anniversary this year, which I find rather bizarre. I thought they’d been around for much longer. If it only takes thirty years for the brand to climb to the top of the crisp ladder then what are the other companies playing at? Perhaps Kettle Chips have their own secret weapon? I travelled north to find out… 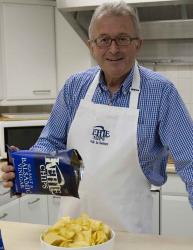 Turns out they do in the form of Chris Barnard, head of operations for Kettle Chips UK and the most passionate enthusiast for fried potato crisps that I’ve met. Chris has a background of working in some of London’s finest restaurants perfecting the cooking of potato crisps before he opened his own restaurant in Norwich. Now his life is devoted to developing strong, robust flavours from quality sourced ingredients.

Chris did send my alarm bells ringing by calling crisps ‘chips’. It feels like an American invasion into our English language, although that’s hardly surprising considering our language does contain ‘weapons” ‘of” ‘mass” and ‘destruction”. Anyway, his knowledge and attention to detail vastly outdoes mine so I didn’t challenge him on the point. Besides, Kettle Chips originated from America. 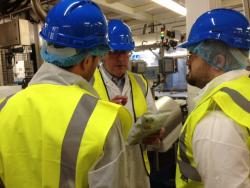 We were taken on a tour that showed the life of a potato in the factory – from the delivery of tonnes of spuds, to the sealing of foil packets of freshly fried crisps. The factory is immaculately hygienic and the volume of crisps being produced is staggering. Arguably the most impressive aspect is that Kettle Chips are still hand-cooking their crisps. Giant tubs of hot sunflower oil are filled with raw potato slices, which are stirred and fried by hand. 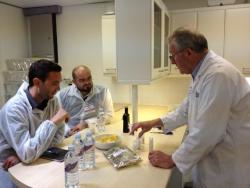 After our tour we visited the kitchen where all flavour experiments are carried out. All the flavours, past and present, produced by Kettle Chips are represented by images of the foil packets on the wall. I’m familiar with all but a few, which were brought out in limited editions to test the market, such as Rosemary, Garlic & Salt, (an absolute winner). Developing flavours means using the ingredients in their pure form, no flavour enhancers or acids. If Chris is able to turn an ingredient into a powder he will, and if he can’t, he’ll keep trying until he can. A photo on the wall depicts Chris as a sort of mad scientist, and I suppose you could view the factory as his version of a Delorean.

Each distinct ingredient is recognisable in the flavour combinations. Let’s take Stilton & Port. First there’s a really rich, creamy mouthful of Stilton, followed by a smack of port, but the final taste is that of potato, which is exactly what Chris wants. The trip’s opened my eyes to a whole new world involving my favourite snack. There’s so much more to crisps than I had ever imagined. No more artificial flavourings, I’ll be sticking to pure ingredients.

By Foodepedia31 May 2012Articles