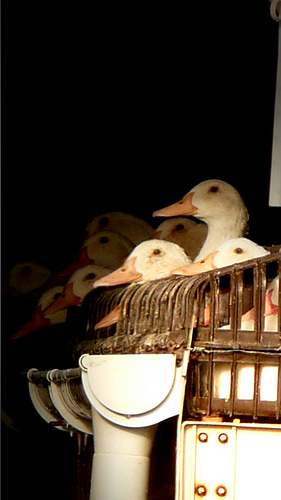 As snow tumbled onto a London unprepared for so much of God’s dandruff, I was shoehorned aboard a plane just three seats slim. Whilst the fuselage was basted in antifreeze, I daydreamed about my destination – the Gers, a remote region focussed on fat and free from motorways. Their most dynamic wine producer had invited me to spend some days savouring the pleasures of the ‘French paradox’, a term invented by an Irish physician 200 years ago to describe the stubbornly low rate of heart disease in a nation bred on plentiful wine and good grease.

Devoted to duck and sewn with a rich genetic heritage of grapevines (anyone for Arrufiac?) the Gers recently became the focus of another medic. Professor Roger Corder wrote ‘The Red Wine Diet’, a quirky guide rating bottles with heart symbols. His argument is pleasingly persuasive. Like dark chocolate, carefully made red contains ‘procyanidin’, a powerful antioxidant beneficial for blood vessels. He favours the locally treasured ‘Tannat’ which makes tannic, opaque wines. Blended with something softer and given time, these mellow into lush, violet scented, meat-friendly bottles. With up to four times more procyanidin than Australian Cabernet Sauvignon, its consistent consumption helps explain Gers’ prevalence of nonogenarians – double the national average.

During the drive from Pau within the Pyrenees’ misty silhouette, I saw a landscape scarred. The most vicious storm of the decade had struck the week before, ravaging half the trees and tangling cables. The locals had already started cleaning-up, sawing pines into logs and propping up power lines.

After a night in a tall Château run by the region’s first legally recognised same-sex couple, I headed into the vineyards for a winegrowers’ breakfast. Everyone but me wore a beret. My senses were roused by the sweet, smoky wafts of barbecued bacon from the black pigs of Bigorre. Fed on acorns and chestnuts, the cerise meat was silken, crisply-fringed with fat which melted on the tongue. Someone gave me a glass of cool, frisky Tannat, which painted my teeth like a vampire. 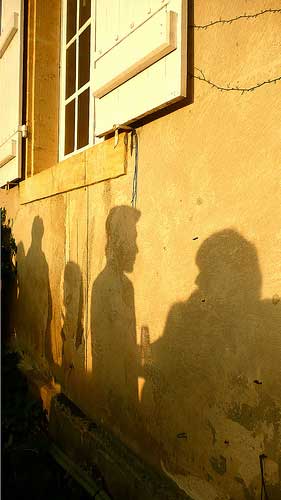 We can also be fed on stories

‘Producteurs Plaimont’ is a cooperative representing most of the region’s grape-growers. I am told that they follow legendary local d’Artagnan’s philosophy – ‘one for all and all for one’. With tempting government grants, vineyards originally sown for, unfortunately unfashionable, Armagnac were worth more ‘grubbed-up’ and replanted with corn, grain and sunflowers. From a winemaking family, André Dubosc founded Plaimont in the late 1970’s to encourage conversion from spirit to wine. Not only did he save the vines – he actually encouraged more planting. To mark the revolution, he flew 80 peasants to Paris where they came face-to-face with future customers in wine shops. This was the first flight for many. In another exploit, Toulouse’s square was secretly flooded with vines overnight and harvested by day. Growers are still asked to promote Plaimont – one day per ½ hectare, per year (although some send family members in substitution!)

High in the hills, I was shown how to prune crucified vines, tugging off tough tendrils. Apparently birds enjoy autumn grapes almost as much as winegrowers adore grape-fed birds.

Having seen but a small selection of Plaimont’s vines, including mossy, gnarled examples with roots dating to the end of Napoleon, journalists and master sommeliers gathered to assess the new blend of two top wines. Rather than a printed label, ‘Le Faîte’ wears a wooden tag and wax seal, souvenirs from a time when bottles were embalmed in cool ground for future generations. Faced with five blends of dense, indigo reds and tense, citrus stained whites, together we chose the most balanced in the studious atmosphere. Even the mysterious wail of an air raid siren failed to disturb our quest for harmony, tannin and quality. 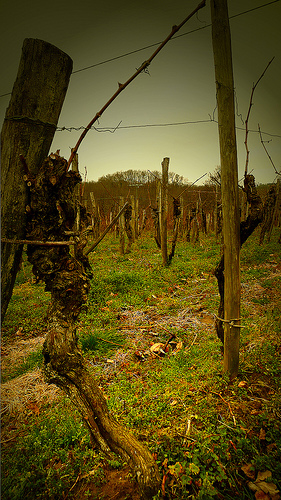 The Joy of Foie

That evening André Dubosc, Michel Bettane (France’s leading critic) and your trusty Foodepedia representative celebrated the finalised blend by uncorking previous vintages. Each was a time capsule of one year’s weather and harmony between grower and winemaker. Before I entered the dining room, I heard a stranger calling my name affectionately. It soon transpired that the owner’s wife was searching for her shiny labrador – another Douglas!

Besides glowing embers, we met our chef, a gifted man, but also a hypochondriac. I later caught him overdosing on homeopathic pellets. We sampled Foie Gras three ways: uncooked tear-salty mousse, coarse, rustic terrine and cooked – my favourite. In texture the generous, cosseting lump felt like creamy scrambled eggs. This came with an onion twist bathed in grenadine. The breast of a male duck raised for its liver followed: pink, moist, warmly fatty and offered with cubed potatoes softly crusted in the bird’s juices. As we raised balloons of Armagnac, toasting the region’s heritage, Bettane reminisced about a lifetime of fine dining, mesmerising all with the description of a white truffle and cherry soufflé enjoyed at the ‘Gindrou’ restaurant, Cahors.

Over the weekend I had observed the quiet but determined spirit of Plaimont to which growers are as rooted as the vines. One told me ‘the soil is ours, nobody can take it.” The Gersois resilience lies in cooperation. Fad diets are shunned and few suffer food guilt – not even about their beloved fattened ducks, some of which I saw fed in clean, airy conditions.

A final tour around a thriving market revealed a dazzling ocular feast of gloriously misshapen mushrooms, sparkling wet fish, arrestingly pungent cheese and meat – whatever you would like including horse steaks, blazing red, their quality attested to by the long queue. Combined with the hearty wine, this confirmed that there is no paradox when ingredients are this good.