For a long time now, gluten has beeen seen as foodie devil incarnate, we went along to a healthy bread class with Bake with Maria to see if we could learn to be gluten savvy instead of gluten scared

Ã¢â‚¬Å“So, before we start, does everyone know exactly what gluten is?Ã¢â‚¬Â This seemingly innocuous question was asked by Maria Mayerhofer, the baking genius behind Bake with Maria, who is out to get Londoners baking and making, one beautifully executed cookery class at a time.

I stumbled up the residential steps to Maria’s Baking Lab on the edge of South Hampstead in the dark one rainy evening last week, utterly convinced I was in the wrong place until I spotted a doorway filled with light and, on closer inspection, emitting the encouraging smell of freshly baked cake. 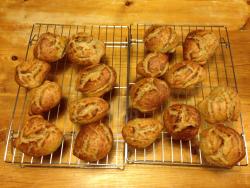 As I walked into the teeny tiny kitchen and work space, I was immediately offered a raspberry financier and some still warm, buttered banana bread and, eyeing it suspiciously, asked if it was gluten free. A mistake, because Maria and her team don’t do gluten free, they do gluten smart, which is why I was there, to take part in a Gluten Savvy Bread Class.

Gluten, a protein composite found in wheat and grains, has had it hard these past few years. Accused of upsetting stomachs from New York to London, it’s been relegated to the unpopular food ranks alongside fat and, more recently, sugar – fat might be getting an invite back to polite dining society; the foodie jury is still out on that one. Today, gluten has almost become a dirty word, uttered by filthy bread cravers whose only socially acceptable outlet is spending £4 on an artisan sourdough loaf, which is the only sort of’healthy’ bread, obviously.

I’ve heard countless people, from housemates to co workers proudly announce that they’re giving up gluten or claiming that they couldn’t possibly eat it as it makes them feel bloated as they cradle their tummies protectively. Now, real gluten allergies are no laughing matter. Coeliac disease is a terrible affliction and means sufferers can’t stand even a trace of gluten, from its presence in soy sauce to ale. Tom from Shipton Mill thinks he knows why people associate that bloated feeling with bread: it’s the quality of bread you’re eating. 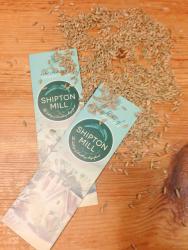 At the time he said this he was encouraging me and a bunch of food writers to squeeze a bog standard sliced white loaf back into dough pellets like we all did as kids, while pointing out that these loaves, which he called’water standing up’, are mass produced, barely proved and full of additives and preservatives that are far more likely to cause irritation than actual gluten ever is. 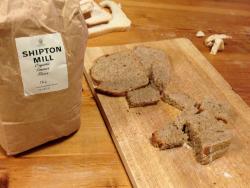 Gluten free loaves didn’t get off easy either, as Tom pointed out that bread should have four ingredients (flour, water, yeast, salt) while gluten free loaves often have closer to 13, with everything from sugar to starch, stabilisers and flavourings added to the original mix to keep it tasting and feeling like, well, bread.

And so began our gluten education, or should I say re-education at the hands of Maria and master baker Emmanuel Hadjiandreou, the author of How to Make Bread, who walked us all through the astonishingly simple process of baking fresh, delicious breads at home.

As well as explaining how spelt (which, incidentally hasn’t really altered for the past 6,000 years) is more easily digested by the body yet still contains gluten and showing us how to roll the perfect seeded baguette, Hadjiandreou showed us how to do a gluten wash – submerging raw dough in water and squeezing it until you’re left with a stringy residue – on different types of bread dough to see just how much gluten they actually contain.

And that’s exactly what the classes at Bake with Maria aim to do: to practically show you the joy of baking and serve it alongside a side order of specialist knowledge. As an added bonus you get to eat everything you make at the end of the class, which for us meant loaves hot from the oven and dripping with butter and Maria’s homemade hummus and beetroot dip and a warm baguette to carry home on the tube, much to the olfactory envy of fellow passengers. 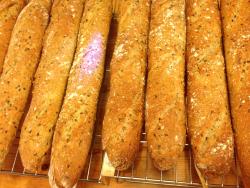 As we were sent home, each clutching our baguettes and beaming with a shared sense of gluten epiphany, there wasn’t one of us that didn’t believe what Maria had been saying to us all along: that healthy, very much gluten FULL loaves are quick and easy and incredibly cheap to make at home and everyone should be doing it.

Visit www.bakewithmaria.com to see all upcoming pastry, bread and cake classes and for more information on prices.