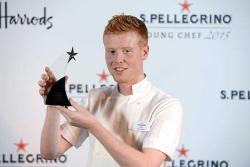 Last night we watched a panel of the UK’s leading chefs – holding five Michelin stars between them Ã¢â‚¬â€œ name Mark Moriarty from The Culinary Counter as the best emerging chef talent from the UK & Ireland at a live cook-off for the S.Pellegrino Young Chef 2015 competition, held at  Harrods of London.

Mark Moriarty has been selected as one of 20 global finalists, chosen from 3,620 chefs across 191 countries, and will represent the UK & Ireland in the final showdown at Expo Milan in June 2015.

Moriarty was chosen with his winning dish of Celeriac Baked in Barley and Fermented Hay with Cured and Smoked Celeriac, and it was good to see a veggie dish winning as well seeing ugly old celeriac join the smart set. 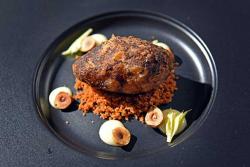 Judge Clare Smyth (who holds three Michelin stars) said:  Ã¢â‚¬Å“The calibre of dishes we tasted tonight was really impressive but Mark’s dish stood out with its flavour, unforgettable theatre and true message behind his dish.Ã¢â‚¬Â

Mark Moriarty now faces the ultimate test in Milan, where he will be mentored by Clare Smyth, who will guide him through the intricate process of honing his signature dish.

Teaming up with a young designer chosen by Vogue Italia who will interpret his dish in fashion, Mark’s efforts will be judged by a panel at the Milan final that reads like a who’s who of contemporary gastronomy: Joan Roca, Massimo Bottura, Gaston Acurio, Yoshihiro Narisawa, Yannik Alleno, Margot Janse and Eric Ripert.