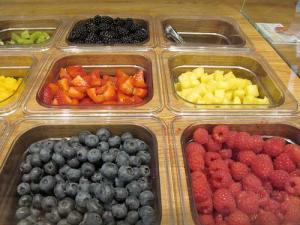 Why is ice cream so fattening? In fact why is everything nice so fattening? It’s simply unfair, it’s as if our minds and bodies have been pre-programmed to commit health suicide.

Plain yoghurt, when I was younger, used to taste of plain yoghurt. It wasn’t sweet and it wasn’t something I particularly liked unless I stirred a couple of large spoonfuls of caster sugar in first. I found the way the granules, which never really dissolved properly, deliciously crunchy on my then unsullied teeth.

The only other yoghurt I liked was the brilliant Ski Swiss Black Cherry and, as the man next door drove an articulated lorry for Ski, we were never short of a knocked-off pallette or two. In fact even now when I hear the hiss of airbrakes being locked my mouth waters in Pavlovian response.

In recent years though the choice of yoghurts on the supermarket had become immense and the public, through exposure to sweetened yoghurts, eats a lot more. 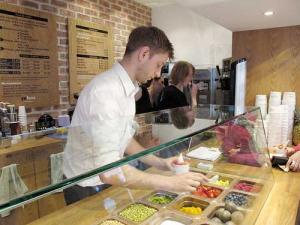 Even so, will they eat Frozen Yoghurt? The answer in Soho is definitely yes and Leo Bedford of Yuforia is reaping the icy benefits. Leo, an impossibly young 24, set up Yuforia in March 2009 and opened the first store in Covent Garden in June that year.

‘The whole thing happened very quickly,’ he says as we settle on some of the huge hunks of solid eco-sourced Scottish oak that Yuforia greenly uses as tables and chairs. ‘I’d spent some time in New York, I loved the frozen yoghurts I found there and the whole thing about no compromise between health and taste.’

I’m nodding encouragingly. I can’t speak because I’ve eaten a lump of frozen yoghurt far too quickly so now some kind of terrible trauma is happening in my mid-chest area I think I may be about to die.

Once the crisis has passed I fail to learn my lesson and shovel in some more using the biodgradeable potato starch spoon. This frozen yoghurt lark is really rather good.

‘The yoghurt is a combination,’ Leo says watching me pig out, ‘we make it in store right here as a blend of yoghurt, milk and the bacteria. The yoghurt is an organic English yoghurt and the milk is also English organic.’ 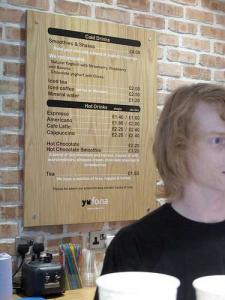 ‘The great thing is that we only need a little machinery to serve with, essentially the soft whip ice cream machine you see in an ice cream man’s van. We just put yoghurt into the machine instead’

‘We can carry enough stock in this small space to last us 6 or 7 days. The fresh fruit of course comes every day at around 6 a.m, we then sit here chopping fruit all morning, it’s great fun

Ordering is simple at Yuforia, you choose your flavour of frozen yoghurt base – natural, chocolate or the day’s fruit special – and then pick your toppings. As well as all the fresh fruit such as kiwi, blueberry, strawberries and pineapple, there are slightly naughty things such as marshmallows, fudge and Oreo biscuits. It’s up to you and it’s a formula that works as queues wont stop forming as we talk.

Leo looks at the crowd and agrees. ‘It’s been amazing here in Soho since day one. I emailed a few friends saying were opening, testing machines, why not pop down? The day we opened the till wasn’t working and we still had half of Soho turn up with a queue out the door for 4 hours until we ran out of stock. It’s been like that ever since!’

Of course its summer and it’s hot, does he think business will slow when it’s as cold outside as one of his yoghurts?

Indeed. Yuforia’s aren’t those massive sticky Belgian beasts but made fresh with pancake batter and the contrast of hot waffle and frozen yoghurt is great. I can’t see any problem selling these in the winter months, in fact it’s a master stroke of marketing.

We squeeze past more people coming in so we can escape back to the office with a frozen yoghurt for the intern. ‘It’s funny,’says Leo as we leave, ‘I eat so much frozen yoghurt now that if I have even the smallest portion of ordinary ice cream I feel sick for a day after!’

I know what he means, yoghurt is definitely the next ice age