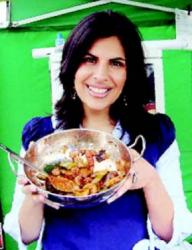 Anjum Anand is a chef oft talked about as the ‘Indian Nigella Lawson’. It is certainly true that her thick, bouncy black hair and pouty lips are comparable, and she exudes an intimidating fertility and lushness that would make males of inferior virility cower in her presence. Whether or not she secretly slinks down to the fridge around midnight to suggestively smother her mouth and its surrounding areas with raita remains to be discovered but the similarities are there to acknowledge.

Against the backdrop of this natural abundance was a press event focussing on Clawson’s Paneer, a type of cheese not so readily associated with opulence and delectability. Regularly used in Asian cooking as a meat substitute, paneer looks and feels rather like halloumi but when cooked it loses the rubbery, squeaky texture the two have in common while raw.

Use the phrase ‘meat substitute’ and take the chicken out of my jalfrezi and I’ll look at you with the sort of withering contempt usually reserved for dubious looking men hanging around school gates, so Anjum’s portfolio of dishes crafted to showcase the merits of paneer needed to be reasonably impressive 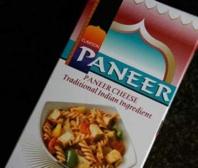 Her curry sauces were as delicious as one would expect and the paneer obediently soaked up the flavours of whatever it was cooked with; saag and tikka masala sauces and a tandoori marinade. Perhaps unsurprisingly, the dishes meant to demonstrate the cheese’s versatility weren’t quite as successful. In a Mexican fajita, grilled cubes of paneer were tough, dry and tasteless and while a cheesecake made interesting use of boiled paneer, the resulting texture was slightly strange and heavy. The cheese is clearly at its best when in bigger chunks and it can draw in the moisture and flavour of the sauce in which it’s cooked.

Despite being slightly sceptical about a cheese that’s too bland to eat on its own, I can understand why some people enjoy paneer as a natural, healthy alternative to meat in curries. I may have been more in love with Anjum than the cheese but if tofu and meat aversion is generally your bag you could do far worse (yes, I’m talking about you, Quorn) than experiment with paneer.