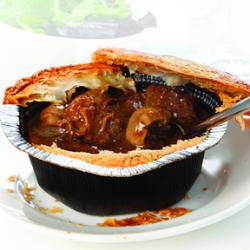 Who ate all the pies? Well me actually.

After first taste trialling Charlie Bigham’s pies it was a quick wipe of the mouth, a loosening of the belt and then eyes down for Donald Russell’s new range.

Hand made and slow cooked in small batches; they have no artificial colours or preservatives, which is de rigueur for any foodie product these days. Mind you, I do have to admit a sneaky fondness for the pies they sell in chip shops. What’s in them I don’t care to know, and the saveloy’s content can happily remain a mystery too, but I still like them on occasions.

Unlike Chaz Bigham’s pies, Don has spared no expense on packaging. Simple tin trays with a sealed plastic bag outer are all the pies boast as window dressing. This is a good sign as he clearly expects the pies to speak for themselves and has spent his money on ingredients and not image.

So into the oven the Steak and Kidney, the Beef, the Cottage and the Shepherd’s Pies go for the short, if cooked from chilled, bake time.

First thing to notice was that the pastry wasn’t rising out of the dish like a small thermonuclear cloud. Far too many pub pies are like that; looks dramatic but serves no purpose. This pastry rose and swiftly become gilded, but it stayed sensibly in proportion to the pie below. The Shepherds’ Pie and Cottage pies simply browned their mash. They smelt good because our oven seal has broken so anything cooking soon fills the house with aroma, prompting the cat to wander over for a sniff.

The Beef pie contained almost 50% beef and looked it too; a well-stuffed pie with good tender meat and rich, clingy gravy. The Steak and Kidney was equally well filled but some of the kidneys could have done with being smaller or being diced up a bit. I pulled out a kidney so large it could have been one of my own.

The Shepherd’s Pie was strongly lamb-flavoured, which isn’t to everyone’s taste, but you couldn’t complain that it didn’t contain lamb. Preferable was the Cottage Pie where minced beef replaced lamb in the mix. Both pies could have done with a bit more mash, but perhaps given the size of the pack more mash would mean less room for meat, and so the decision was made to stick to the expensive ingredients, which is no bad thing. 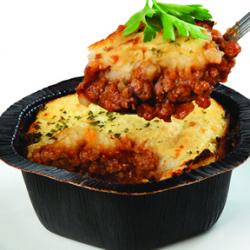 We ate them with simply boiled and buttered potatoes, some mange tout and a good spoonful of frozen peas and one pie is plenty for one person making them a very handy week time treat when pressed for time.

Really rather good pies overall and you can get the selection pack on line at the Donald Russell website for just £16.00 ex delivery. The website is massive, showcasing a remarkable range of meat products and orders over £60 come with free delivery.

Given the clear quality of the products it has to be worth making a big order and clearing the freezer ready to receive it. Good butchers are hard to find outside ivory postcodes so it makes sense to save time and money and load up.