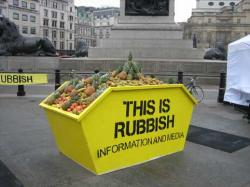 I have lined up the russets, wondrous in their crunch, the foxy Coxs, the carrots – knobbly – and the bananas. All of them perfect, earthly gifts distributed during the feeding of the five thousand. It was a Biblical act, a water-coloured wintry vision in Trafalgar Square – part West Country festival, part Regency splendour as the skies unloaded their first Christmas snow onto a lunchtime mob of far more than 5,000 believers.

What was happening was a cluster of charities, including ActionAid, FareShare and This is Rubbish, had decided to serve up all the surplus fruit and veg that would otherwise have been wasted by local growers as a nutritious lunch. Don’t bin it, belly it. They want to highlight how UK households waste 25 per cent of all the food they buy, and this was represented here as delicious, fresh produce, spread on stalls, piled in a skip, for all and sundry to save from waste. In fact, according to ActionAid, the average UK family wastes around £480 worth of food a year for which price three children could be saved from malnutrition.

So under driving snow, the smiley volunteers proffered gifts of vegetable curry, fluffy breads and smoothies. Fast-moving queues snaked around the speakers and plinths. The smoothies stall, set up in one corner of the square, had endless supplies of nutritious beverages, all from three days of rejects by one Kent wholesaler. Yet all of this, because not perfect enough for celebrity superstores, had been destined to die. I guess as long as we have creamed and pureed dullards dictating our diet of Heat magazine and X-factor, our quest for perfection will even determine food prettification. My foxy Coxs, scuffed produce, seemed a gift from God. I’d rather be one of the 5,000 fed in snow than one of 5million frozen heads.Grrrrrr, it’s cold out there!