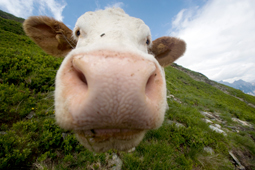 To Goodman in Maddox Street where the concept of a Russian steak restaurant is in full swing at a special press dinner. Named after Benny Goodman, the Russian/Jewish jazzman, it’s actually part of a chain that began life in Moscow in 2003. Of course we in the UK are used to the idea of hard people from the frozen North selling us steaks, after all we’ve had Aberdeen Angus steakhouses in London since Putin was a boy.

Weirdly some of the waiters look either like secret service operatives or hired muscle and when I try out my O level Russian on them they reply swiftly, but with a certain suspicion in their looks. Have I been marked for termination after? Well, we’d best get some food in first.

The traditional way to start a meal in a Russian steakhouse is, we are told, with tumblers of vodka and a plate of pickled fish and vegetables. This is very nice indeed and any thoughts about how the vodka is going to sit with the bottle of Malbec now open on the table are dispelled as Mother Russia’s ruin rushes to the brain. Nibbling pensively on a pickled chilli I begin to feel quite comradely all of a sudden.

Rather a la Gaucho Grill the meat is brought around raw to scare/impress you and the waiter points out fillet, T-Bone, New York strip steak etc and, with the help of a scale model of a rather surprised looking cow, explains which bits come from where. The beef itself is sourced from the USA and Australia and is aged in the restaurant’s own aging room for up to 40 days. The steaks are then cooked on a specially imported charcoal grill to an exact internal temperature in the giant kitchen. Of course it’s not just steaks, there’s a range of alternatives like Label Anglais chicken with lemon and thyme, organic salmon carpaccio with tomato seeds and passion fruit, lamb, pork, fish ribs and burgers too, It’s a mix that has seen Goodman – motto A Good Steak for Good Men be very successful in Moscow and at the reasonable prices they’re charging it should work here too.

Our steaks were cooked exactly as asked for and had fine flavour, the chips were standard stuff but no complaints, and only the mushrooms half-heartedly lobbed into a too-large bowl seemed disposable. When you go the loo, a tape plays jazz when it senses you open the door and the smell of freshly sawn MDF is quite pleasant really.

It is undeniably odd – the concept of a Russian steakhouse – and their marketing material seems a little lost in a 1980’s time warp but nonetheless you can’t knock a good steak and these are very good steaks.