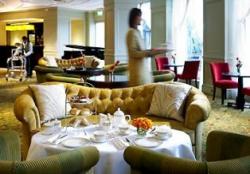 Having been given a Red Letter Day gift of Afternoon Tea for two at one of some five Marriott Hotels in London about a year ago, we finally got around to using it recently, about a week before its validity expired. We decided to tie this in with going to see a West End show afterwards to make it, as Wallace (or is it Gromit?) would say, ‘a grand day out’. So, having got our tickets from the TKTS booth in Leicester Square, we had a light lunch, and spent some time trundling around the great metropolis, before descending upon the Grosvenor House Hotel at the appointed hour for tea – 4.00 pm, naturally! If one is going to do these things one has to do them correctly.

On arrival our Red Letter Day voucher was taken from us and we were seated in the lounge area where tea is served. We were each given a menu, which set out what ‘Anna’s Tea’ consisted of and asked to choose the beverage that we would prefer to accompany our tea. I chose Oolong, a very light tasting tea that had a delicate fragrance and PA chose High Grown Ceylon blend, a darker brew that had a fuller body. Whilst looking at the menu we saw that you could upgrade your tea and include a glass of Champagne for an additional £8 per person and we thought that as the gift was to celebrate a special occasion, we should go for it. The Champagne arrived and it was very pleasant sipping it in the convivial surroundings that this lounge offers. Soon after, the two pots of tea arrived, as did unexpected ‘appetisers’ of finely diced fruits in mango juice, served in a port glass, which were nicely refreshing.

Once the starter glasses were cleared, the tea arrived, a three tiered silver server, a little bent out of shape, which was quite ironic, as by the end of the afternoon, so was I. The bottom tier contained a range of eight mixed triangular cut sandwiches, crusts cut off, of course, which was, we were told, refillable. The middle tier, four scones (two plain and two fruited, well, just about fruited) and the top tier had five assorted cakes/pastries. This was accompanied by pots of strawberry jam, honey and clotted cream for the scones. We started on the sandwiches, which were pleasant enough, quite meanly filled we thought, but they were OK. Slowly working our way up the tiers, we then moved on to the scones, these were light, but quite dry, crumbling as they were cut, the cream and the good quality jam were their saving grace, lubricating them well. We then struggled through a few of the sweetmeats on the top tier, which again were good, but not exceptional. We were asked if we would like more tea, which we both accepted, it had been a pleasant afternoon. Then we asked for the bill.

The bill arrived, it just covered the Champagne, as the rest of the Tea had been taken care of by the voucher and we saw that we had been charged £27 for this small frivolity. When the waitress came we said that we thought this was wrong, because the differential in the menu was only £8 per person and that was what we had expected to pay. After an unsatisfactory exchange the manager was brought. He said that as we had not paid for the whole tea ourselves that we would have to pay bar prices for the champagne. We felt that this was wrong and explained our position (i.e. the differential in the advertised offer in the menu) the man, became overly assertive, obdurate and loud, all this in the middle of the lounge, a supposedly ‘civilised’space. He said he’d been nice to allow us to choose our own tea (and naturally, we were grateful to him for that!) he then went on to say that the hotel only receives £12 per head from the Red Letter Day people and that this was the reason we were being charged 50% more than other customers for our drinks. He also said that we were fortunate as we had ‘only paid £27 for our tea’ – it had already been paid for! The ‘discussion became cyclical, this manager, who in our view had scant management skills, was resolute and made no attempt to defuse the situation. A simple apology that he could do nothing else, perhaps while he sat talking to us at a reasonable volume, rather than standing talking loudly some few feet above eye level, might have helped. We were appalled by this behaviour and his attitude, as well as being disappointed by the niggardly cheapness of an organisation that we have, hitherto, has a good customer and provider relationship with.

Regrettably, our ‘Red Letter Day’ was spoiled by this experience, which sadly left a sour taste in the mouth. The situation might have been avoided if Marriott insisted that vouchers state that any alcoholic beverages would be charged for at normal bar prices. We also find it rather incredible that the Red Letter Day organisation skim off as fee/profit a fat £51 from a £75 experience. If what the Marriott manager said is correct it will certainly make us think very carefully before buying one as a gift for anyone in the future.

Following our visit on 7 November, in the interests of fairness and balance, we paid another visit to The Grosvenor House Hotel to have their festive Champagne afternoon tea. The surroundings remained unaltered, still an elegant setting in which to relax and enjoy afternoon tea, some festive decor lightly scattered around the room just added a seasonal feel to the place.

We had taken the Mother-in-Law (Mil) this time, in part as a treat for her but also to give a fresh perspective on the experience. We were seated at a table near, but not too close to the window, so had great views across Hyde Park from the comfort of our low level seating. The Champagne arrived, nicely chilled and bubbly, as were we. Next to arrive was the finely diced fruits in mango juice, Mil, not a ‘sweet’ person, wasn’t keen on that, but we liked it as much as the first time. This was followed by two three-tiered silver servers full of goodies.

The slight difference between the Festive Tea and Anna’s Tea is the addition of turkey and cranberry sandwiches and the Hebrides smoked salmon, both of which were good, as were the usual array of sandwiches, the scones were the same though thicker than those we had on the first visit and as a consequence much more moist and very pleasant. The jam and cream was superb. The selection of cakes were different, including as it did, fruit cake, mince pie, layered walnut mousse cake and chocolate and rum terrine log, sadly I couldn’t manage more than a taste of a couple, but the layered mousse cake, mince pie, and a fruit tart were all good. Service was very good and attentive, altogether a very nice experience, enjoyed by us and Mil and a treat, which is both enjoyable and relaxing. At £37 per head, this is not a cheap afternoon’s entertainment, but as an occasional indulgence it is something that should be experienced.