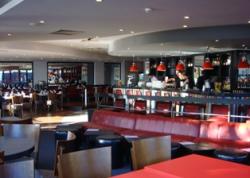 This half of foodepedia’s ‘two-headed monster’ (pa) works at Canary Wharf, and is often asked where to eat or drink – the answer has invariably been ‘somewhere else’. For an area with so many workers, and a good number of presumably well-off residents, it’s pretty poorly served for eating and drinking, unless (with one or two notable exceptions) you want to go to a chain outlet and pay over the odds for so-so wine and food in corporate hell surroundings.

But new to Canary Wharf, is Lower East, a bar/restaurant close to Westferry Circus and the pier: and it’s a one-off. Officially opened at the start of September, Lower East used the quiet month of August as a soft launch, and get their act together before the busier months ahead. It seems to have worked: the food and drink were very good, the staff friendly and efficient.

The main room is well laid out, with a crisp-looking, smart restaurant area, and a similarly decorated but more casual area for drinking and lighter bites. Outside there’s a large patio with great views across and down the Thames towards the City – perfect for an after work drink and a bite to eat.

Things kicked off with a choice of three house cocktails, and in the interests of research, we tried each one. Kiwi Martini (a Kiwitini, if you must) had the vodka kick that you’d expect, but was nicely balanced by the tang of the fruit, and very drinkable; Cosmopolitan also had a bracing hit of booze, but with tart cranberry and the intense sharpness of its scattering of lemon flesh shreds; a Raspberry Mule had so much raspberry flavour, ak swore that after three of them, he’d had one of his five a day. Well, it’s a theory.

To help soak up the alcohol, we had some food along the way. Lower East does a range of ‘sliders’, miniature versions of larger dishes… we didn’t ask how they came by the name, but they certainly slid down very easily. A mini beef-burger had good quality beef, cooked medium, so the centre was still pink and juicy; a lobster BLT was very good, a small piece of streaky bacon complementing the sweet lobster very well; a mini tuna burger was another winner – the fish still juicy, and nicely balanced by a dab of punchy mustard; fish and chips (cutely served in a small frying basket) were very good, the fish piping hot and moist, with a light batter, although we would have preferred a few chunky chips, rather than the thin fries it came with; a mini hot dog was given a lift by chilli and mustard.

The small taste of Lower East that we had has certainly left us intrigued to go there and eat or maybe just sit on the terrace and have one of our five-a-day each! A five minute walk from Canary Wharf station, Lower East is a refreshing change from the identikit offerings on the estate, and well worth a visit.