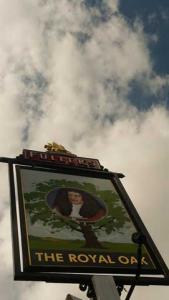 ‘Whilst we’ve caught the odd stranger approaching Michael to slip him a demo CD, or pass on a love letter to Kylie, more people come for our Scotch eggs than the celebrity connection,’ chuckled Dominic Chapman, chef of Sir Michael Parkinson’s ‘Royal Oak’ pub, Paley Street.

Just voted ‘Best-Ever Scotch Egg’ by Olive Magazine and described as ‘a gourmet reinvention of the motorway service station staple’ by critic Terry Durack, just one bite revealed why people make the detour. Served on a slate coaster, the molten, soft-boiled quail’s egg is bound in a moist cocoon of rare breed pork and sage, rolled in a panko crust. ‘We get phone calls from expectant diners checking we made enough. Others want a batch to take-away. We even had requests to courier them across the country – a compliment, but they wouldn’t last the journey.’

Car windows rolled down to capture the final summer air, crisp with cut grass; I had seized an afternoon away from London’s incessancy to meet one of the most celebrated and influential gastropub chefs ever. Voted 2009’s ‘Best Young Chef’ by Tatler, and ‘Best Pub Chef’ by both the Good Food Guide and Craft Guild of Chefs, Chapman has, for the second time in his life, transformed the culinary reputation of a once dilapidated brewery pub. From day-glow pink interior and ‘domestic fridges’ to suede chairs, discreet jazz, chat show stills and an extensive cellar, the recent AA ‘Restaurant of the Year’ now holds its own against the six Michelin stars of competition just down the road in Bray.

I caught up with Chapman after a busy lunchtime service. Coinciding with GCSE results day, well-heeled families were out in force, keen to celebrate or commiserate. 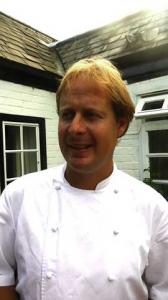 Despite having very high expectations from reading so many favourable reviews, Chapman’s cooking delivered beyond the promise. A thick-cut but tender, lightly smoked Somerset eel salad came with amethyst-like, cubed beetroots berthed on horseradish cream, sprinkled with discreetly uplifting chive pearls set around a nest of bitter dandelions. This was followed by a tender lamb medley rustled from Yorkshire: Swaledale cutlet, sweetbreads and prawn-shaped kidneys with firm, braised peas, moist lettuce and mint and a side order of rectangular ‘Chippers Choice’ chips. Big but brittle and surprisingly leavened, I must side with Michael Winner – they were the product ‘of a genius for sure.’

Causing ‘a massive headache’ for Chapman, the chips cannot be served at the beginning of the new crop, from late June until early July. ‘Regular diners look visibly upset when we tell them they are unavailable. But the water-sugar levels are all over the place.’

Whilst his style is discernibly British, Chapman’s grandmother is Greek and he frequently visits the country for culinary inspiration. A Mediterranean influence shines through an otherwise game rich menu in the form of spiced aubergine, fried courgettes and bracingly fresh taramasalata. Indeed, Chapman’s most striking meal was ‘sitting on a beach in Greece eating grilled fish, sucking every last bit from the bone.’ 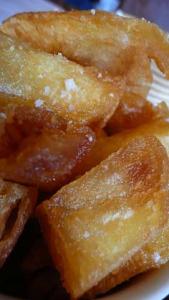 As well as a love of Greece, a dedication to hospitality runs through Chapman’s blood. Most notably, his great, great grandfather, Henry Pruger took his experience of managing London’s Savoy Hotel to Bratislava, launching the Ritz-Carlton. Changing his surname to Chapman to avoid persecution by Hitler, Pruger’s eldest son ran the glamorous Imperial Hotel, Torquay whilst his brother, Peter established the Castle Hotel, Taunton. His son, Kit Chapman OBE overhauled it into five-starred decadence and continues to run it, although a recent BBC documentary looked at the possibility of Dominic and brother Nick taking over the mantel. Of his father, Chapman recalls the early advocator of English food ‘banging on for years and years and years about reviving staples like Lancashire Hotpot long before celebrity chefs.’ Alumni of The Castle include just those: Phil Vickery and Gary Rhodes, the latter of whom ‘excelled in the brief’.

Chapman’s happiest times were at Heston Blumenthal OBE’s nearby ‘Fat Duck’ restaurant. ‘When I worked there as Chef de Partie from 2000, it was very different to today, with a menu of steak and chips and lemon tart.’ He also worked with founding father of modern British cooking, Rowley Leigh as Sous Chef at ‘Kensington Place’. Chapman describes his plated personality as ‘sitting between Rowley’s simple, gutsy, comforting food and Heston’s meticulous finesse’. 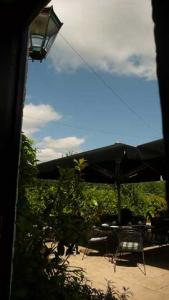 When Blumenthal seized the opportunity to revamp the 16th century, ‘Hind’s Head Hotel’, located within sight of The Fat Duck, Chapman was appointed to launch it. Motivated by ‘a once rich history, when distinguished regulars included the Queen and Prince Philip’, he set to work overhauling what had become a ‘drinker’s pub’ with Blumenthal’s ‘right hand man, Ashley’.

‘They were serving three covers on a Saturday from a filthy kitchen without a fresh ingredient in sight. It all had to go – the year’s worth of frozen desserts including ‘Razz Jazz’ cakes, deep-fried Brie wedges, Mornay jars… And we ripped up the bar carpet, thick with filth to reveal a beautiful parquet floor, which you see today.’ For the first month Chapman served ‘nothing but sandwiches’ whilst ‘testing dishes’. His characteristic patience paid-off. The pub was soon re-positioned as one of the UK’s finest, described by The Independent as ‘the sort of pub you dream about when you close your eyes, and think of England.’ Serving unfussed British fare with care, including shepherds pie and memorable chips, it was to become a blueprint for The Royal Oak – and an inspiration for the many vibrant imitators across the country.

Despite the fact that Blumenthal is yet to visit, Chapman considers him a friend. ‘I even took my wife, Helena on a ‘surprise date’ to his revamped Little Chef. Whilst she wasn’t impressed that I made a stopping point our destination, I loved it – particularly the braised ox cheeks.’ 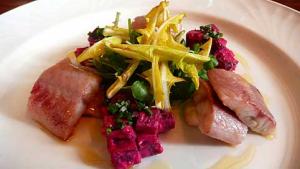 After a wispy pastry tart spun with ripe greengages and balanced by an electric acidity, Chapman showed me his kitchen. With echoes of Blumenthal’s set-up in Bray, we started in the workshop at the back, housed in a surprisingly Tardis-like shed. In the main kitchen, he paused to add water to a cauldron of veal stock several hours into its eight-hour simmering schedule. As I spotted an incongruous carved wooden horse on a shelf, Chapman smiled, explaining it as ‘my lucky mascot taken from The Hind’s Head.’

As with pubs like Marco Pierre White’s ‘Yew Tree Inn’ and Jamie Oliver’s parents’ ‘Cricketers’, I wondered whether Chapman intended to expand The Royal Oak. I was relieved to hear that he ‘absolutely does not – we don’t have a west end mentality here.’

Regardless, there is an element of glamour to Chapman’s work. ‘We did a seafood banquet for Russell Crowe featuring an ice carving of a clam.’ The feast for 60 also included a whole pig on a spit, then gushingly full chocolate éclairs, baked toffee apples, and what The Guardian’s Guide, Humayun Hussain described as a ‘legendary trifle’.

Does Chapman have any advice for wannabe chefs? ‘I tell mine to write everything down. Logging and tweaking is so important. That way I can see exactly what I was up to 15 years ago. You have to respect your past’

And what of the future? Chapman believes there’s a lot more to achieve at The Royal Oak. He describes owner Nick Parkinson as being ‘like a Producer – we talk every day, and after rubber-stamping my plans, he lets me get on with it. I want to bake sourdough next and invest in a better Salamander grill.’

Whilst not ‘a fame seeker’, Chapman has undoubtedly had a great year critically, finally stepping out of the shadow of illustrious mentor, Heston Blumenthal, and celebrity patron, Michael Parkinson. He does not however cook ‘to please the guides’ keeping his feet firmly on the ground. ‘You’re only as good as your last meal and I’m very happy to continue on this tack, taking a hell of a lot of care. But even though we’re busy, I still take time out to think creatively.’

Also, look out for the literary fruits born of all that meticulous logging. Whilst Dominic’s father is perhaps best known for his revealing tome about the day in the life of an hotelier, ‘The Innkeeper’s Diary’, Chapman acknowledges an inherited yearning to communicate, getting closer every day to penning a major ‘culinography’…