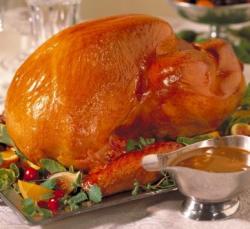 So Marco Pierre White is to be a brand ambassador for Bernard Mathews Turkeys and the sound of bloggers and sanctimonious columnists having hissy fits is deafening. You’d have thought they would have exhausted their anger when MPW started advertising stock cubes, but no there is still plenty of bile to spare. Honestly you’d have thought he’d been caught eating Panda, not simply earning a few quid for himself

However it is the way with Gods that their disciples often turn on them when they fail to live up to the high standards set for them by others. MPW sold a substantial part of his soul quite some time ago and so these further developments should come as no surprise to anyone.

As a matter of fact, the stock cubes he advertises aren’t at all that bad as stock cubes go and any domestic cook who claims never to use stock cubes is telling massive porkies. As for Bernard Mathews, well to be fair he has taken a lot of stick over the years with his ‘bootiful’ turkeys and at the same time made a lot of money from people who couldn’t give a flying drumstick about where their poultry came from, they just wanted food they could afford. Not everyone has the income to exercise food choice. Very few columnists are on minimum income or the dole.

And Bernard has made every effort to clean up his act, whether from personal feelings of guilt or because he sees it as good PR is debatable. The point is that he is doing it. His turkeys are born and bred in Britain, not simply ‘processed’ here, a substantial number are now free range and their welfare is monitored by reputable bodies. It is in fact a myth that BM ever factory farmed.

Of course Turkey Twizzlers became the feathered bete noir of a thousand angry editorials and came to signify everything that was bad about school dinners. You can’t blame Bernard for that though; no one made the local authorities buy them after all.

I don’t eat turkey myself, not even at Christmas; I just don’t like it much. I am not going to promote it or denigrate it and I am not going to cast stones at MPW for advertising it. There are more important things to worry about that what an ex-celebrity gets up to in order to pay the rent.