There comes a point when you have to say c’mon guys, enough is enough, joke’s over, just drop it.

I’ve reached that point with Marmite and its marketing campaign. 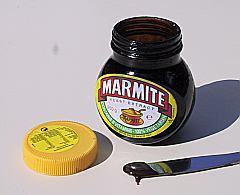 Don’t get me wrong, I love Marmite. I must do as I’ve been slathering it (as Nigel Slater would damply say) on my breakfast toast every morning for the last thirty years. I grew up on Marmite sandwiches and I pretty much ate nothing else at college.

And I love the ad campaign. The ad agency has done exactly the right thing by identifying a unique truth about the product, that people either love or hate it, and instead of burying the hate bit they have proudly stressed it.

We saw the same thing with Pot Noodles and The Slag of All Snacks – no attempt to pretend they are a gourmet snack, just the terrible truth, which is we all feel a bit dirty after succumbing to a Pot Noodle.

The trouble with Marmite started when they handed over the concept, and a large sum of money no doubt, to the Social Media marketers, the ones who sit around sockless in Hoxton, talk a lot of impenetrable jargon about Web 2 and attempt to grow beards before the hormones are ready to oblige.

Suddenly the concept became virally leaden, overworked, boring and irritating. Even snail mail wasn’t safe. I got sent a cupcake made with Marmite earlier this year and then some Marmite chocolate. Both were totally, totally, disgusting. That isn’t a love it or loathe it subjective response, they were simply inedible by anyone who hadn’t had his or her tongue cauterised. It was just another stunt.

Then I get a call yesterday from a Marmite Spokesperson telling me, in a strange accent that I found hard to understand, that £60k worth of Marmite Chocolate had been stolen from a warehouse and wouldn’t this make a good story? Tweet? Facebook entry?

No it wouldn’t because the whole thing smelt rankly of yet another publicity stunt. I’m not accusing Marmite of wasting police time but I am definitely accusing them of wasting mine. Even the densest blog bunny wouldn’t fall for it.

Marmite is a good product, a great one, a British icon in fact. But people do either love or hate the stuff and Marmite can Twatter, Facebook and create stunts all they like and almost no one is going to change their mind on where they stand.

No doubt Nathan in Hoxton is even now waving a piece of paper (virtually of course) that shows how many hits the ‘theft’ story has received. If all those hits were jars sold to new customers, it would be impressive.

The truth is though that the number of new Marmite eaters created by this sort of trite and transparent activity is negligible, while existing eaters will still buy the same amount each week, no more and no less. Even Marmite lovers can only eat so much.

And some people, like me, will actually find their brand loyalty sorely tested. I hate to say it ‘dudes’ and I’d love things to be different, but you’re really boring me now. Run some more of those witty ads if you like, but spare me any more Social Media cunning stunts.