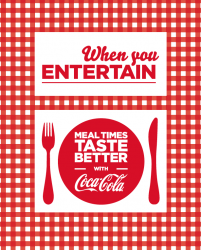 As a food and drink writer, it’s as well to have an open mind (and matching jaws). When I saw the title When You Entertain, I thought it sounded promising; then I saw the sub-title – Meal Times Taste Better With Coca-Cola. Uh-oh, this isn’t promising – I don’t much like Coca-Cola (or any other cola, come to that) and aside from the occasional Long Island Iced Tea, haven’t drunk it for 20 years or more. But as I say, open mind and all that, so I take a look, and things start to get interesting. The book features recipes from four notable cooks; the Michelin starred Tom Aitken, Liz McClarnon (the Atomic Kitten and winner of Celebrity Masterchef in 2008, Julia Parsons (founder of the UK Food Bloggers Association) and Alex James (Blur bassist, farmer and cheese factory owner).

Although I wouldn’t personally consider Coke the ideal accompaniment for food (unless it’s fast), there’s some history behind the book. Back in 1932, the American food pioneer Ida Bailey Allen produced a book of the same title, hers being sub-titled What To Do And How. It was designed to help the reader – among other things – be a perfect hostess and was presented by Coca-Cola. At this point, I’m intrigued to know more, so I read on, and pretty much straight away, When You Entertain starts to win me over. As the editor says in her preface, eating together is one of the great ways that people come together, and in these time-challenged days, anything helping to preserve that tradition has to be a good thing.

When You Entertain has a pleasingly retro feel, with the overall red and white design reminding me of a 50s diner. The recipes are split into four sections: Saturday Night With Friends, Family Meal Times, Weekend Lunch & Brunch and Easy Lunch, each with around ten recipes. Not the most obvious order, perhaps, but still. And anyway, quite a few of the recipes could go under more than one heading. The recipes are a curious mix of big food, such as the braised lamb shank with honey roast garlic and lighter dishes, like pea and mint rice with feta. The common ground is that they would all be good for sharing and no, they don’t all contain Coca-Cola: but some do and look rather interesting, such as the Coca-Cola sticky ribs. All of the recipes have a picture of the finished product and happily, seem suitable for cooks of all skills levels – as most are family-friendly, it might be a good way to involve kids with the cooking.

One of the features that I liked about When You Entertain is that each recipe has nutritional information at the foot of the page, and at the back of the book is a summary, including the GDA for each. Some of the recipes are heavy on fat, salt or sugar (the full English breakfast takes the honours), but those dishes aren’t ones that you’ll eat every day, and others are a healthier option – the sticky salmon with Chinese greens is one of a number of figure-friendlier recipes.

Open mind or not, I won’t be converted to drinking Coca-Cola any time soon, but this book has left me very open to its possibilities as an ingredient. When You Entertain charmed me with cheery presentation, accessible recipes and its ethos that good food is for sharing – and I’ll happily drink to that.