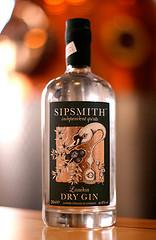 So, it would have been rude to turn down a very civilised invitation to join the Sipsmith team at The Dorchester Bar in order to taste their wares, well, it would, wouldn’t it? Actually, we didn’t need to give it even a second’s thought, of course we were going to go along. Having rocked up there in the evening, as we approached the entrance we thought our eyes were deceiving us, as it seemed like The Dorchester had already started putting up their Christmas decorations and as we got though the revolving doors, we saw that our eyes were not deceiving us, there was a whacking great Christmas tree, lavishly decorated in the foyer!

Enough of the frippery, we quickly found the bar, and our hosts within it. It seemed like only seconds after our arrival that Sipsmith’s gin and tonics were thrust into the steely grip of each of us and very good drinks they were too. Our evening had begun. The refreshingly vibrant bubbliness and the gin background notes washing through the palate from these welcoming drinks prepared us well for what was to come. The neat tastings were next, a measure each of the gin and the vodka, both served at room temperature and as we sipped, the Sipsmith team explained to us the process making these two beverages. Not really vodka drinkers, we were surprised at the depth of flavour that this one had, a slight sweetness, with soft warm notes and some peppery afterheat developing on the palate, it had a viscous-like coating quality in the mouth which we loved. The gin had a more complex flavour, an edgy fruitiness and again, like the vodka, peppery afterheat developing in the mouth and a nice mouth coating viscosity to it. We understand and were amused, that the booze tasting cognoscenti call this ‘mouth-feel’, which almost sounds rude, so viscosity does it for us. 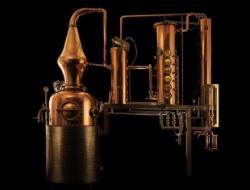 We tried the gin in the specially created ‘Prudence’ martini cocktail. This was made with the gin, vermouth, dry sherry and orange bitters, served with a long strip of carved orange peel snaked around the glass from its base with a swirl sitting in the drink giving it additional orange flavour – a homage to the swan necked still in which the gin is produced. It was a lovely drink. After this I really wanted to try a straight dry martini using Sipsmiths which, of course, I did and it slipped down very nicely, the fruity fullness of the gin, just slightly adjusted by the vermouth worked beautifully together. We both thought that the gin and vodka were excellent products.

The the gin and vodka each start out life as barley spirit, which Sipsmith buy in and then distil into the finished article, having gone through maceration proceses to achieve their distinctive individual flavours. They are made in small batches of no more than 500 bottles, each batch handcrafted by the Sipsmith team.

Sipsmith gin and vodka is available in only a small number of outlets, but you can order it direct from the makers. Should you want to know more about these two products, you might wish to check out their web site www.sipsmith.com where you will also find the ‘buy’ option.