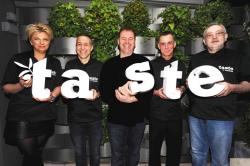 Invited to a Soho restaurant safari by the Taste of London people, I accepted straight away. The Safari was to give us a flavour of some dishes that three Soho restaurants, Quo Vadis, Gauthier Soho and Bocca di Lupo/Gelupo, would be serving up at the forthcoming Taste of London, held at Regent’s Park from 16 to 19 June this year.

The three we visited on safari will be among an eclectic gathering of 40 restaurants that will be strutting their stuff at Taste. Visitors to the festival will be able to purchase Crowns which they can exchange for tasting plates from any one of those 40 outlets.

So what goodies did we foodie journo’s get to sample at these three participating restaurants? Well, our safari started with us meeting at Quo Vadis in Dean Street and here we settled down to a tasting of some Lustau Puerto Fino sherry, which it has to be said was a great way to kick the evening off. The sherry was bone dry with a fresh clean acidity and some nice length to it. Then came the Quo Vadis sampling dish, their 56 day hung grilled rib of beef with triple cooked chips and béarnaise sauce. The beef was served medium rare and was delightfully tender and full flavoured, the chips’ crispy, crunchy exterior, encasing their fluffy core kept that texture even when they had cooled. The sauce was a good accompaniment to the meat – and the chips for that matter. With this we had a glass of Chivite Coleccion 125 Reserva 2005, a lovely red with a great berry fruit nose and big forest fruits on the palate, medium bodied, it had medium to light tannins, which were reduced when drunk with the food, bringing out the wine’s fruity sweetness. We also had a glass of San Pellegrino, which complemented the wine very well.

Moving on to our next course at the recently Michelin starred Gauthier Soho we climbed what seemed like endless stairs to the top of this warren of a place before reaching a private room. Here we were served an excellent Black Truffle Risotto that had such a great intensity of truffle flavour I just didn’t want it to end; divine just doesn’t describe it well enough. Paired with this we had a glass of Masi Masianco Venezie IGT 2010 which had an acidic fresh citrus nose and good sharp yellow fruits on the palate, it was a white with some body and big bold tangy fruit that paired well with the risotto, complementing it without detracting from its flavour. We were also served with Acqua Panna and San Pellegrino, I thought the Pellegrino was the better match with the wine.

Our third and final stage was at Bocca di Lupo’s ice cream parlour, Gelupo, both in Archer Street where my fellow journo’s tasted a Gelato Cup, bianco di bianchi, coconut yoghurt, ricotta, sour cherry – hating coconut I had an alternative creamy creation which was very good indeed. Along with this we were each brought an amazingly good cucumber, Hendricks gin and rose granite cocktail, which was nothing less than a perfect end to this little safari.

All of these dishes described, and the coconut ice cream, can be found at Taste of London during this four day extravaganza. As you can tell, I was impressed. To find out more about the four day event go to the Taste of London site where you can read about what’s going on there, get ticket details and more.