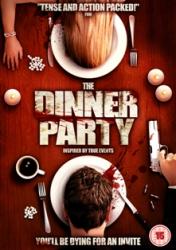 At the very start of The Dinner Party is the legend ‘based on a true story’ (the story in question is that of Joe Cinque, killed in 1997 by his girlfriend, Anu Singh). Now sometimes, this can be another way of saying ‘avoid’, but with an open mind and matching bag of popcorn, I set all reservations aside, and settle down to watch.

The Dinner Party, filmed and set in Canberra (where Singh and Cinque lived), is the story of – go on, guess – a fateful dinner party, told via flashback by a group of people being interviewed by Australia’s finest. It’s clear from the outset that A Bad Thing has happened, but the what and the how are, at this point, unknown.

The story centres around Angela and Joel. Angela (Lara Cox, Heartbreak High) is beautiful but damaged, insecure and untrusting of boyfriend Joel. Their relationship is plainly in trouble, and Angela plans to kill both Joel and herself. She wants their last night to be shared with friends over dinner (the titular Dinner Party), and goes about gathering guests. As the small group arrive at the apartment, little do they know that Angela and her friend Maddy have procured a lethal dose of heroin for Angela to use later in the evening on Joel (having first laced his coffee with Rohypnol) and herself.

The small cast is entirely Australian, and for the most part unknown in the UK. While Cox is convincing as Angela, Ben Seton as Joel comes across as utterly wet and you wonder how Angela could be driven to the brink of murder/suicide by him. The rest of the cast acquit themselves well, with the glaring exception of Kai Harris (Freddie) who plays the stereotypical Australian ‘bloke’ quite broadly and you half expect him to start extolling the virtues of barbies and tinnies while wearing a hat bobbing with corks.

The Dinner Party unfolds as a character-driven drama and as the story is gradually revealed, the viewer is an unseen, uninvited guest, and although not at first involved, the developing drama draws us in, and poses interesting questions about responsibility and consequences. It’s just a shame that some key moments are overshadowed by the incidental music, rather than allowing dialogue and natural sounds to provide the dramatic and emotional punch that the story undoubtedly has.

The disc includes a commentary from writer/director Scott Murden and producer Brendan Sloane, which is quite entertaining: they talk about the film-making process, explain the effects that they were aiming for, and share anecdotes. At the start of the commentary, Sloane describes doing it as an ‘ego trip’, and there is an element of self-indulgence, but that’s perhaps true of all such endeavours and in this case, the hosts are engaging enough to keep the interest levels up for the duration.

As a film about a group of young, urban Australians, this might be its natural audience, indeed, the commentary mentions that the makers sought to create characters that the viewer can relate to. But for anyone interested in character-driven drama, The Dinner Party, which is available on DVD from 12 July, should be a rewarding experience – just keep an eye on your coffee…