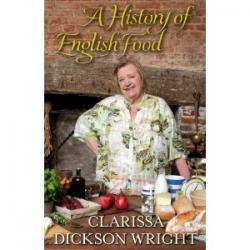 This was the first time I’d set foot through The Savoy’s revolving door since the 2010 refit and, contrary to the carpers who have denounced the upgrade, it fair took my breath away. None of its gilded charm has gone. You just want to stop and take it all in. But in The Savoy this is impossible as a mere 15 seconds of static gaping will have a smart suited staff member scurrying to your service, apologising for leaving you unattended.

Ushered downstairs to a magnificent ballroom, more than 200 people had gathered to hear the surviving ‘Fat Lady’ recount a concise gastronomic history of this landmark hotel and English fodder, beginning with the feasts of medieval kings right through to spam and prawn cocktail. All part of her marketing push for her new book ‘A History of English Food’ of course.

If we think of dinner at The Savoy as a decadent treat now, consider the birthday bash for Edward VII in 1905 when the forecourt was flooded and filled with fish and white swans. Doves fluttered high above 24 guests seated on a silk-lined, flower-filled gondola where they were served 12 courses of unimaginable excess. The birthday cake was brought in on the back of a baby elephant. Legendary French founding chef Escoffier had gone to the Ritz by this point but his mark in haute cuisine had been made.

A History of English Food opens a good 700 years before Edward, at the time of the Crusades, and credits the Princess Diana of her day, Eleanor of Aquitaine, with introducing Eastern spices such as cinnamon and nutmeg to Britain. From the High Middle Ages onward Dickson Wright describes in the book the minutiae of our diet from the popularity of swan, peacock and beaver tail (classed as fish), to the advent of breakfast (salt fish or boiled mutton, bread, butter and beer) towards the early sixteenth century.

She examines the theory over the take-up of staple ingredients such as the potato – not the overnight success we were led to believe and regarded with suspicion for many years because of its descendency from the deadly nightshade family – and reportage on the debt we owe to a corporate joint stock company for bringing us bananas, pineapples, coffee and tea. The focus is always on the meals of the privileged and not of the common man, but this is likely because their menus make better reading than roast rat and gruel.

There are age old recipes to try at home – Spiced Wine Custard, Sweet and Sour Fish – that actually sound quite appetising. There are, perhaps unsurprisingly from a countrywoman with a penchant for game and venison, swathes of references to hunting. There are, says Clarissa, too many deer in the UK, wreaking havoc on trees and farmland. The answer? Eat them. After all our digestive system has always been more attuned to digesting venison, than it ever has beef.

As a food historian, there can’t be many better placed to officiate than CDW. A former barrister, she has an astounding capacity for retaining information and a dry wit with which to recount it. She writes with authority and assurance, even when she knows there isn’t any evidence to support her earliest ideas, but the majority text is so detailed and intrinsically linked with English heritage that its authenticity surely cannot be called into question.

There can’t be any living soul who knows as much about food as she does. This is a woman who has eaten and drunk herself silly for the past six decades and admits there isn’t much left in the world that she hasn’t consumed or imbibed (her musings on swan, ‘very fishy, rather stringy”, are drawn from personal experience). At one point she owned a quarter of the shares in the Hong Kong and Shanghai Bank – and drank them all.

If you love food you will suffer the repetitive strain injury incurred by holding her heavy hardback aloft at night with a glad heart and revel in its sumptuous tales of boar brawn, hot oyster patties and Beefsteak Clubs; of pistachio creams, stargazy pie and thick liquid chocolate served bubbling in pots.

Much like her 2007 autobiography, Spilling the Beans, I expect this book will be top of the bestseller lists and make a big bulge in your Christmas stockings, in more ways than one.

A History of English Food is published by Random House, priced £25.