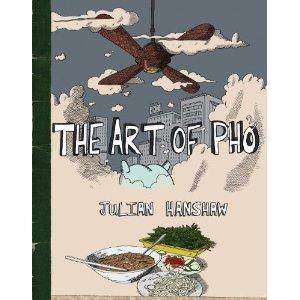 Pho – as you cosmopolitan lot might know – is a beefy, noodly, minty broth – much loved in Vietnam and in the screechy badlands of London’s Dalston. The Art of Pho, as fewer of you might know, is a surreal, original and quirky graphic novel inspired by Vietnam’s food, set in Ho Chi Minh City.

Published this month, the book is haunting in its drawings whose colour scheme of mustard, sage, elephant and peach has occasional flashes of dagger. But in its story, animator and illustrator Julian Hanshaw is almost melancholy. Part narrative dream, part recipe book, The Art of Pho tells the story of a hose-faced character called Little Blue. Little Blue – not human – who knows what – winds up in Ho Chi Minh and makes a living from hawking pho from his pushcart. He learns about Vietnamese food, the more to sell from his wagon. Hanshaw, within the story, treats us to graphic peeps into favourite recipes – summer rolls, pho, dipping sauces. His images also show us the ingredients. Here’s catim – a thin, seedless variety of aubergine. And there’s sa, lemon grass. Oh, and tickling my eyeline here is rau muong, some kind of water spinach. But I digress – as does the strange and wistful story. Little Blue encounters characters in the sweaty city, along desert paths that lead to nowhere or in futuristic metropolises. Of course, there’ s a little love story, what else in a book of food? And there are frightening edges, shadowy characters lurking at the margins of the book and our imaginations.

Anyone who’s backpacked around South East Asia and stopped at old Saigon – like yours truly – will love the references to places such as the Reunification Palace and the war remnants museum. And if you like strange, travelesque graphic novels, I’d say try this out. It leaves you feeling a bit spooked, kind of nicely.