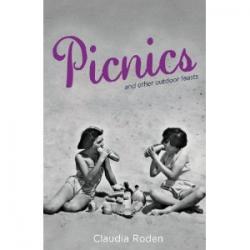 I think it was in Mrs Beeton’s book that I once read the line,’remember, domestic servants are only grown children, treat them as such’. It was quite a jaw dropping moment and yet Mrs B really meant no harm, she was only talking as any woman of her class would have done at the time. After all, the past is another country, they smoke cigarettes there.

And yet here on page 147 of Claudia Roden’s book Picnic we find,’ Barbecuing has become a fashionable way of entertaining in the summer months, opening a whole new tradition of cookery in England.’  When did she write that? 1941? 1961? No, apparently she wrote it in 1981.

Of course 1981 was a time when, while the rest of the country was bracing itself for padded shoulders, saucy cocktails and the pocket genius that was Rick Astley, food was still something no one’ordinary’ talked about all that much. Food writers were nearly always middle class, nearly always women and nearly all wrote in a literary version of RP.

The re-issue of this book is thus a bit surprising. Those that enjoy Claudia Roden’s writing will presumably have bought it when it came out, the present foodie generation will probably have never heard of her and if they have, dismissed her out of hand. What does she know about burgers and fried chicken after all?

This is shame because behind the inescapably anachronistic style (there are no pictures, but she does at least fall short of calling recipes’receipts’) there’s quite a bit to enjoy, not least the pleasure of reading properly constructed sentences.

Far from sticking to sandwiches, khaki chicken legs in tinfoil and all the other picnic stalwarts of the time, she offers Middle Eastern Street Food ( at the time far from fashionable and quite esoteric), food from Mexico (ditto) and guidance on what to eat at Glyndebourne and what to pack for a shooting lunch on the moors. This last challenge is not perhaps something many of us worry about.  Nor perhaps do many of us bring up our children with a nanny in the nursery, as Claudia seems to think we do, or at least did then.

It’s not an’easy’ book. It takes food very seriously and the recipes are not user friendly, as there are no’stages’ and the ingredient list is not bullet pointed. Many of the measurements are also rather laconic. On quite a few occasions it reads like a parody,’There is a large variety of green leaves which you can eat raw in a salad’, or is in fact actually designed as a primer to be read to servants of middling to low intelligence.

So can I recommend it? Well yes in a way, it’s a fascinating window back in time to when food writers were properly educated and actually experienced, there are some really rather good recipes in there and some nice stories. Roden is one of those writers who we will almost certainly never see the like of again; she should be preserved in aspic. And then taken on a picnic.

And if you do actually have servants, well it will certainly make a marvellous Christmas present for them.